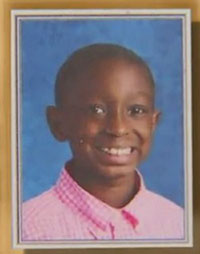 A sixth grader at Ridley Middle School in Pennsylvania was punched by a student and then called a malicious racial slur.

According to the mother, Liante Robinson, the school has given her little details into how the situation is being handled.

On Friday Sept. 22, 2017, Robinson’s son Nivre, a brand new student at his school, was walking down a hallway to class when he got into an argument with a White student.

Robinson says that the White student punched her son, scratching his eye. “As they were going inside the classroom, the student then said to my son. ‘That’s why you are a n—–.’ Said that to my son,” she told Fox WTXF news.

In a school report, Nirve described the incident to school officials. The next day Nirve got into another incident with a different student. He wrote a-bout that student asking where he was born and he told him to go away.

Robinson says, “the young man then goes and sits at another table and speaks to another student and says, ‘You know I could kill him, right?’”

After that Robinson spent the next couple of days contacting school officials through calls and emails to find out what was going to be done about the incident.

The school’s Dean of Students got back to her saying that the boy had been punished. “He just kept saying to that it’s a 3-day suspension for physical contact. That’s it. If he would not have physically assaulted my child, he would not have been suspended,” explained Robinson.

Robinson says that there was no indication that the student would be punished for the racial slur.

Nirve didn’t go to school as he was shaken by the events. He’s expressed wanting to go back to the school, but his mother feels differently.

“You are not insuring me that you can keep my son safe. You’re not giving me answers. You’re not doing anything,” she says of the school’s duty.

Although not threatening a lawsuit, Robinson’s attorney is keeping a close eye on the situation.

The Ridley School District released a statement saying that they don’t comment on students specifically but with an incident like this one the student attacker would be suspended with a mandatory parent re-entry conference and counseling for the attacker and the victim.