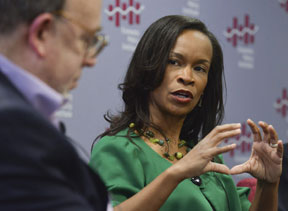 Valerie Wilson, the director of the Program on Race, Ethnicity, and the Economy at the Economic Policy Institute (EPI) speaks jobs and the economy in the Black community during an event at EPI.  (Freddie Allen/NNPA News Wire)

WASHINGNTON, D.C. (NNPA) – The Black unemployment rate fell to single digits (9.6 percent) in April, for the first time since President Barack Obama was elected in 2008.

Despite the improvement, the Black jobless rate is still double the unemployment rate of white workers, which has remained flat since February at 4.7 percent.

Valerie Wilson, the director of the Program on Race, Ethnicity, and the Economy at the Economic Policy Institute, a progressive think tank focused on low- and middle-income families, said that said that the gradual decline in the Black unemployment rate is the result of strong job growth over the past year.

As the economic recovery in the United States continued its slow, uneven climb in April there were still clear disparities, even among adult Black workers.

Wilson said that, since December, Black men have enjoyed most of the larger employment gains compared to Black women.

Since last April, the labor force participation rate, which is the share of the population that is either employed or looking for work, increased from 66.5 percent to 68.7 percent in April 2015 among Black men. The labor force rate for Black women only increased 0.7 percent since April 2014.

Wilson said that a renewed focus on targeted jobs programs and infrastructure investments would enable the economy to get closer to full employment, but cuts to public sector employment, especially at the state and local levels, may prolong the sluggish recovery.

According to the Center on Budget and Policy Priorities, a nonpartisan research and policy group that designs policies aimed at reducing poverty and inequality, the economy has shed nearly 570,000 government jobs, more than 360,000 jobs in local government alone, since February 2010.

According to the Labor Department, average hourly earnings have only increased 2.2 percent since April 2014.

During recoveries in the past, falling unemployment rates meant that companies were forced to raise wages to compete for available workers

This recovery is different, Wilson said, in part because there’s still a decent amount of slack in the labor market.

Wilson’s research also revealed that the Black unemployment rate, “is at or below its pre-recession level in six states: Connecticut, Michigan, Mississippi, Missouri, Ohio, and Tennessee. But this numerical recovery must be put in proper context because each of these states also had Black unemployment rates that were among the highest in the nation before the recession.”

The national unemployment rate was 5.4 percent in April down from 5.5 percent in March and the economy added 223,000 jobs in April for a three-month average of 191,000 jobs per month.

In a recent blog post for EPI, Josh Bivens, the research and policy director at EPI, wrote that returning the labor market to pre-Great Recession levels is too unambitious a goal.

“After all, 2007 could hardly be described as a year with the kind of high-pressure labor market that would boost wages across the board,” said Bivens.

Bivens continued: “Instead, we need to target the kind of high-pressure labor market that we haven’t seen since the late 1990s. Anything less than this will leave the majority of American workers frozen out of sharing in economic growth through wage gains.”

The first visit is a basic meet-and-greet, plus paperwork. The paperwork asks both standard medical questions, as might be seen in a doctor’s office or hospital, as well as personal life questions, such as “How much sleep do you get each night?” or “Is there any personal or family history of drug use?” The first few conversations will be light, centering on hobbies, work, and key people. Clients can ask questions of the therapist as well, both personal and as relates to counseling.

In the following session or sessions, the conversation will likely be about whatever led the client to begin therapy.

“A lot of times I’m not [clients’] favorite person. I don’t push and prod for you to make breakthroughs, but I will ask you those questions to make you think. So that’s one thing people don’t like to do, they don’t like to think about their own issues or their own flaws that might be contributing to the negative aspects of their lives,” Davis says. “If I can help someone say, ‘I’m going to break myself out of my own personal hell that I’ve put myself into’ by talking, then I’m going to do just that.”

Everything said in counseling is strictly confidential – therapists cannot tell relatives or employers anything without the client’s permission, not even a confirmation that a person is receiving counseling. There are two exceptions to this: if the therapist received a subpoena, or if the client is an immediate danger to him/herself or others.

While the need for therapy doesn’t always mean a mental illness is present, a therapist may sense something after several sessions. If this happens, they may suggest an assessment, which range from questionnaires to medical tests depending on the issue. If an undiagnosed mental condition is found, the client and therapist discuss treatment options together, as would happen in any doctor’s office.

Sometimes a counselor can be a bad match for a client. For example, if a counselor doesn’t have experience with the client’s concerns (such as race, sexual behaviors, substance abuse), the counselor may cause emotional harm or discomfort out of ignorance.

A person can end therapy and/or switch therapists at any time, even after just one session – without advance notice and with no additional explanation beyond notifying the therapist of the desire to terminate.

“There are plenty of therapists that have never gone to therapy, so they don’t understand what their clients are feeling – that I have to walk into this office, I don’t know you from a can of paint, and I have to divulge things about myself and expose my own personal vulnerabilities,” says Davis, whose master’s degree program required students to receiving counseling. In her adulthood, she has been treated for depression and an eating disorder. “I can tell you that it was amazing for me, because it helped me figure out more things about myself.”

Terrie Williams, author of Black Pain: It Just Looks Like We’re Not Hurting, says that in the Black community, mental health awareness is slowly winning the fight against stigma.

“I believe, sadly, that there is still stigma with mental illness,” said Williams, who publicly disclosed her own challenge with depression. “At the same time, there has been considerable growth, greater awareness, greater space for people to share what it is that they’re dealing with. It’s a much more comfortable conversation among us than it had been in recent years.”

The Center for Disease Control and Prevention reports that Black people are 20 percent more likely to report “serious psychological distress” than Whites or Latinos. Black notables such as Metta World Peace (née Ron Artest), Halle Berry, and writers Mychal Denzel Smith and Bassey Ikpi routinely highlight and contribute to mental health awareness in the mainstream conversation. Ebony, Essence, Jet and Uptown magazines have all featured several pieces on mental health over the past few years.

“So much of what happens in our everyday lives has to do with unresolved trauma. And we see it every single day in our streets,” Williams says. “There’s so much post-traumatic stress disorder in our community. You see somebody shot and killed right in front of you, and then you get up and go to work or school the next day like you didn’t just see that.”

Williams, who is also an award-winning publicist, mental health advocate and educator, says that there are many signs a person should pay attention to in themselves that may signal unresolved emotional pain. A few include:

The most common barriers to getting care, outside of the stigma, are lack of insurance or a way to afford the care; inadequate health care plans that do not cover counseling; and a lack of professionals in the area.

People in these situations can call the federal Substance Abuse and Mental Health Services Administration (SAMHSA) 24/7 treatment referral line (1-800-662-HELP, or, 1-800-662-4357). The Department of Health and Human Services has Health Resources and Services Administration (HRSA) health centers around the country in both rural and urban areas where care is based on income; the nearest center can be found at www.findahealthcenter.hrsa.gov, or by calling (877) 464-4772 from 8 a.m. to 8 p.m. on weekdays. For help with suicidal thoughts or attempts, the National Suicide Prevention Hotline (800-273-TALK, or, 800-272-8255) is available at all times.

Davis also points out that many employers have employee assistance programs that offer temporary mental health provisions at no cost. Additionally, all hospitals/emergency rooms have mental health professionals on staff at all times. Therapists are also receiving new guidelines on counseling clients remotely, through video chat apps.

But simply deciding to seek therapy can be a higher hurdle than getting access.

“Run to a therapist! Because everybody that you know is walking that fine line…there is not anybody on this planet who is not dealing with something,” Williams says. “Everybody wears a mask…we pretend that we’re fine when, really we’re just dying on the inside. When you can’t get at the person who harmed you, you will take it out on somebody else.”

Police convictions difficult to come by

Police convictions difficult to come by
[…]

The Buffalo Soldiers National Museum has a reason to celebrate. A century and a half ago Black soldiers called “Buffalo Soldiers” first served in the American military. […]

On the same day that Loretta Lynch was sworn in as the 83rd United States Attorney General, the chief law enforcement officer in the nation, about 40 miles north of Washington, D.C., pockets of “Charm City” descended into lawlessness in response to decades of police corruption and brutality in poor, Black communities in Baltimore. […]