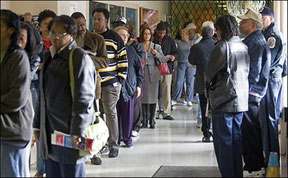 WASHINGTON, D.C. (NNPA) –Despite major advances to access to the ballot box nearly 50 years after the passage of Voting Rights Act of 1965 (VRA), Blacks, living primarily in the South and Southwest, continued to face challenges at the ballot box, according to National Commission on Voting Rights (NCVR) report.

Last summer, the United States Supreme Court invalidated the Section 4 coverage formula in the Voting Rights Act that required jurisdictions with a demonstrated history of voter discrimination to “pre-clear” any changes in voting laws with the Justice Department of a federal court. The ruling effectively neutered Section 5 of the VRA.

“Four states formerly covered by Section 5 of the VRA – Texas, Louisiana, South Carolina and Georgia – rank as the worst offenders,” according to the report. The study found that, when it comes to voting discrimination, Texas was the worst state in the country, “including multiple state-level violations.”

Last August, Attorney General Eric Holder filed a law-suit against Texas over a restrictive voter ID law that went into effect after the Shelby decision, and also sought to support groups who took the Lone Star State to court over redistricting policies.

Following the Shelby v. Holder ruling, civil rights lawyers have increasingly used Section 2 of the VRA to defend voters’ rights across the nation, but the report acknowledged the limitations of Section 2 law-suits.

“While Section 2 provides important and considerable safe-guards against discrimination, it does not provide the same level of protection that Section 5 afforded minority voters,” stated the report. “Section 2 litigation is often complex and can be slow, time-consuming, and expensive,” especially for poor, minority voters with access to limited resources.

Under Section 5, covered jurisdictions had to prove that new laws didn’t create added hardships for poor and minority voters. Section 2 reverses that burden of proof, placing it squarely on the shoulders of the voters and civil rights lawyers.

Since the Shelby v. Holder decision, new, controversial voting laws have been passed, forcing civil rights and Justice Department lawyers to expend resources battling over whether those laws hurt thousands of voters.

“The findings show that contrary to the court’s assertion voting discrimination is still rampant and that states and localities previously covered by Section 4 and Section 5, the [Voting Rights Act] provisions struck down by the court, continue to implement voting laws and procedures that disproportionately affect African Americans, Latinos, Asian Americans and Native Americans voters,” said Arnwine.

“Redistricting plans that dilute minority voting strength typically submerge minority voters in overpopulated districts, divide minority population concentrations to prevent them from comprising the majority of a fairly-drawn district (“fragmentation” or “cracking”), or unnecessarily over concentrate them in a minimal number of districts (“packing”),” stated the report.

Robert Kengle, co-director of the Voting Rights Project at the Lawyers’ Committee for Civil Rights Under Law, said that redistricting is the reallocation of political power and there is always a temptation to make minority voters the pawns in that process.

Kengle added: “Sometimes it’s just as simple as saying, ‘We don’t want minority voters electing candidates,’ and the district lines are drawn to prevent that.”

Jurisdictions that pass plans are usually more discreet today than they were in the 1960s or 1970s, but when you look at the results, sometimes the results are very similar, observed Kengle.

Leon Russell, the vice chairman of the NAACP Board of Directors called redistricting ‘a partisan tool.’

“For legislatures that are dominated by one particular party, it’s that party that usually draws those lines to protect its political power,” said Russell. “If you can control who votes and where they vote, you can control the power.”

Following the Shelby decision, the Justice Department made severe cuts to its federal observer program.

“The federal observer pro-gram provided an important deterrence against voter discrimination with 10,702 observers deployed from 1995-2012,” the report said.

Election observers monitor the polls “not so much with an eye toward bringing a lawsuit, but rather allowing people to vote without concerns for intimidation,” said Kengle, adding that, in recent years, observers have documented compliance with the language minority provisions of the Voting Rights Act.

Federal observers also keep an eye on the voting process on the ground and take notes in a way that attorneys or other election observers are not able to do, said Kengle, who worked in the Voting Section at the Justice Department for about 20 years and supervised election coverage.

Losing that monitoring power will be a huge loss for minority voters, said Kengle.

“Blacks are conscious of the history that produced the Voting Rights Act of 1965 and all the sacrifices that people made so that act could become law,” said Arnwine.

Arnwine disagreed with the majority decision in the Supreme Court Shelby County case that concluded that the rise in Black voter turnout and the number of minority elected officials signaled that the Section 4 pre-clearance formula in the VRA was outdated and that voter disenfranchisement was largely a problem of the past.

Arnwine sees if differently, noting that increased Black voter turnout doesn’t mean that it’s easier to vote, “it means that people are more determined to vote.”

The Black Voter Empowerment Coalition is a Florida statewide outreach and voter registration plan developed to increase voter participation in the African American community in the 2020 election cycle. The goal is to raise the level of Black involvement, participation, and enthusiasm through education, marketing, organization, and awareness. The project is committed to inform the African American community the importance of the vote. It is an act, and it provides our community with a voice. […]

Black voters are not apathetic

Black voters are not apathetic
[…]

Black Voters and The Case for Biden-Harris

My 104-year-old grandmother, Mamie Bland Todd, fought for civil rights her entire life. Now she and I are fighting to protect Black people and communities threatened by President Donald Trump and the people he has put in positions of power. We are working hard to elect Joe Biden and Kamala Harris. […]