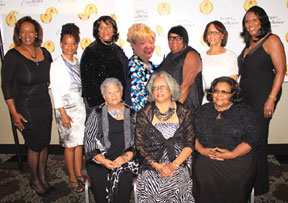 In 1827, with the publication of the Freedom’s Journal, John Russwurm and Reverend Samuel Cornish established the Black Press and boldly declared their mission: to be the voice the African American community, standing up for victims of injustice, and championing the unsung.

Dedicated, resilient and strong Black women, who account for a significant number of the 211 African American owned newspapers and media companies, that are members of the National Newspaper Publishers Association (NNPA), stand at the forefront of that mission, today

As Women’s History Month concludes, NNPA President and CEO Dr. Benjamin F. Chavis Jr., said that it’s important to recognize publishers like Rosetta Perry of The Tennessee Tribune, Elinor Tatum of the New York Amsterdam News, Janis Ware of The Atlanta Voice, Joy Bramble of The Baltimore Times, Brenda Andrews of the The New Journal and Guide” and the many Black women that own and operate media companies in the United States and around the world.

Chavis said that it’s also important to acknowledge the role that women play as leaders in the NNPA.

“Four out of five members of the NNPA executive committee are women and, in 2017, that shows that NNPA, as a national trade organization, is out in front of all other organizations in putting women in the top positions,” said Chavis.

Denise Rolark Barnes, the publisher of  The Washington Informer,” serves as chair of the NNPA; Karen Carter-Richards, publisher of the “Houston Forward Times holds the position of first vice chair; Atlanta Voice publisher Janis Ware serves as treasurer; and Shannon Williams, the president and general manager of the Indianapolis Recorder works as the organization’s secretary.

“For the Black Press, Women’s History Month becomes more noteworthy because of the women of the NNPA and their very important roles,” Chavis said.

Still, the pressure of operating a newspaper isn’t lost on publishers like Richards of the 57-year-old Houston Forward Times.

Richards took over after the death of her mother, Lenora “Doll” Carter, whom she shadowed at the paper for more than 30 years.

“The business isn’t for the faint of heart and being a female publisher requires you to be even stronger,” Richards said. “Because of what my mother taught me, Forward Times Publishing Company has grown to become a multimedia company and award-winning national publication.”

Chida Warren-Darby, managing editor and co-publisher of the Voice & Viewpoint in San Diego, said that being a female publisher has proven to be an “amazing experience.”

Warren-Darby also offered advice to the next generation of women.

“[Women publishers] should always remain true to themselves and never conform. There’s a lot of authenticity missing in the world of journalism and the media industry as a whole,” Warren-Darby said. “I believe it’s slowly returning, but it will take the next generation to maintain that authenticity. I would also encourage them to know that their voices and ideas matter, to never underestimate what they bring to the table, and to never feel like it’s too late.”

Others have spelled out what the Black Press has brought to the table.

The New York Times noted that, well before the Civil War, publications and, more recently, radio and television stations owned and operated by African Americans have provided an important counter-weight to mainstream media, simultaneously celebrating and shaping Black culture—from politics and government to fashion and music.

It all starts with the Black Press and many of its talented and savvy female publishers.

“The Black Press has been the heartbeat of Black America since its inception,” said Tatum, publisher and editor-in-chief of the New York Amsterdam News, one of the most influential Black-owned and operated media businesses in the world, which ran its first edition in 1909. “From the abolition movement, to the Civil Rights movement to the Women’s Rights movement, the Black Press has been our voice, a voice not heralded anywhere else.”

Tatum continued: “A voice so true to itself that our community still heeds the call today. A voice in many cases owned by women, run by women and nurtured by women.”

About 190 miles south of New York, Bramble founded The Baltimore Times on the premise that they’d publish only positive stories about Black people. After more than 30 years, Bramble said that The Baltimore Times paper, and its companion, “The Annapolis Times,” haven’t wavered.

“I am extremely proud to be a part of the long tradition of respected women publishers. My challenges as a publisher have not come from my gender, but rather my race,” Bramble said. “Black newspapers must jump through ridiculous hoops to receive or even be considered for advertising and promotional dollars.”

Women are changing the world and represent an important audience that should not be taken for granted, said Natalie Cole, publisher and CEO of “Our Weekly Los Angeles” which was formed in 2004 and boasts a readership of more than 200,000 weekly.

“As an African-American woman publisher, readers and investors and supporters should not get caught up on my ethnicity as the driving force to their decisions as to do so would be to sell themselves short,” Cole said. “Therefore, the challenges that exist today are challenges to doing business successfully in our global marketplace. Yes, racism and, in many cases institutional racism is evident…some will never buy what we are selling.”

Cole continued: “However, we must continue to educate our loyal readers as to major players or companies that support our communities as well as those that don’t support us with an emphasis on companies to which African Americans are their core customers.”

With the diligence of the NNPA member papers, news, information and commentary have been delivered each week to more than 20 million readers.

Since, its founding, the NNPA has been lauded for consistently being the voice of the Black community, reporting news that makes history.

“Our papers are trusted, read from cover to cover and are a vital part of the community—190 years and still going strong,” Bramble said. “I am sure that we will still be around another 190 years, as we continue to be the standard bearer for all the good news that’s happening in our communities.”

“It’s not easy being Black and male in America. Despite historic gains made in the last 50 years, Black males from all walks of life continue to face challenges and hardships that have created significant disparities in the areas that are most critical to ensuring that our boys have equal opportunities to develop the skills required to become successful men,” said Rep. Wilson in a statement on May 13. […]