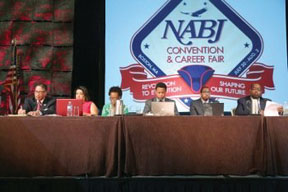 Blacks in newsroom at all-time low

The National Association of Black Journalists is the largest organization of journalists of color in the nation. (Courtesy photo)

By Stacy M. Brown, Special to the NNPA from The Washington Informer

Last week, The Huffington Post offered this bold headline: “There will be more non-white journalists because the public will demand them.”

But based on an extensive study published in the Columbia Journalism Review, apparently no one is demanding Black journalists; if so, no one’s hiring them.

According to a newly released American Society of News Editors (ASNE) census, the number of Black newsroom employees has increased from “fewer than 5 percent” to 4.78 percent since 1968.

“The reason for the discrepancy between minority and white newsroom hires isn’t that fewer non-white candidates study journalism or apply for positions on the ground floor, as Ben Williams of New York Magazine once speculated. It’s that fewer of them get hired, even though they apply at a similar rate to white candidates,” the Huffington Post noted in its July 24 edition.

That story noted the Columbia Journalism Review’s story, which arrived with the headline, “Why aren’t there more minority journalists?”

The statistics in the story are pretty shocking, leading Alex T. Williams, a graduate student at the University of Pennsylvania, to research reasons for the discrepancy.

Williams does note that the percentage of minorities employed in daily newspapers (the ASNE looks at Black, Hispanic, Asian American, Native American, and multiracial populations) has increased from 3.95 percent in 1978, when the ASNE began conducting the census, to 13.34 percent in 2014.

Still, as Williams noted, these figures are a far cry from the 37.4 percent of Americans that are minorities. As the federal Equal Employment Opportunity Commission pointed out nearly 50 years ago, unequal employment may lead to unequal coverage, a complaint that persists today.

“It may also simply be bad business, given the staggering purchasing power of minorities, the opportunity to attract more readers, and research that suggests minorities may be more interested in local news than Caucasians,” Williams said.

So why aren’t there more minority journalists?

When BuzzFeed asked Ben Williams, digital editorial director of NYMag.com, what would make it easier for him to hire more diverse candidates, he expressed a common sentiment: there are not enough candidates.

“It’s well-established that, in part due to economic reasons, not enough ‘diverse’ candidates enter journalism on the ground floor to begin with,” he said.

“So the biggest factor in improving newsroom diversity is getting more non-white employees into the profession to begin with.”

Between 2000 and 2009, Williams’ research found that minorities accounted for approximately 24.2 percent of journalism or communications majors.

“While this number is not high, it’s still not as low as the number of minority journalists working in newsrooms today,” he said.

“Between 2004 and 2013, minorities accounted for approximately 21.4 percent of journalism or communications graduates. Again, while it is not a high number, it doesn’t explain the low number of minority journalists,” he said.