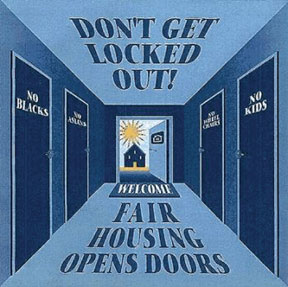 Blacks locked out of housing market

WASHINGTON, D.C.  (NNPA) – As the housing market recovers a new report by the Urban Institute shows that Black borrowers “have been disproportionately shut out of the market.”

According to the report titled, “Where Have All the Loans Gone? The Impact of Credit Availability on Mortgage Volume,” the share of Black borrowers was 6 percent in 2001 but fell to 4.8 percent in 2012. By contrast, the share of White borrowers increased more than 3 percent from 2001 to 2012 and now account for 71.2 percent of mortgage loans.

According to a report by Zillow, a home and real estate marketplace and the National Urban League, “Blacks experience the highest loan application denial rates. 1 in 4 Blacks will be denied their conventional loan application, as opposed to 1 in 10 whites.”

Even though a majority of people poll said that their loan application process was positive, many felt that their race was a factor in that experience.

“Specifically, 37 percent of Hispanics, 33 percent of Blacks, 25 percent of Asians and 14 percent of Whites said they thought race was a contributing factor in their experience,” stated the Zillow/NUL report.

In some instances, that has been documented. In recent years, a large banks, including Bank of America and Wells Far-go, have paid millions of dollars in penalties to settle federal lawsuits for discriminating against minority borrowers.

Blacks and Hispanics are much more likely to qualify for Federal Housing Administration (FHA) loans which often have lower down payment requirements, and reflects the diversity of the U.S. population, the Zillow/NUL report said.

“Among the set of FHA applications for a home loan, 6.8 percent are from White applicants, 10.1 from Black, 16.5 from Hispanic and 3.2 percent from Asian,” state the Zillow/NUL report.

The housing market crisis resulted in roughly seven million homes being lost to foreclosure, a process that makes it much harder for people to qualify for a new mortgage. The Urban Institute also reported that the homeownership rate fell 4 percent from 69 percent in 2005 to 65 percent in 2012, which means 5 million former homeowners are renting now.

Sales volume has also decreased from a 6.25 million homes in 2001 to just more than five million units in 2012, a 20 percent decrease.

The decrease in homeownership also limits the opportunity for many Black families to build wealth.

The Institute on Assets and Social Policy (IASP), a research and advocacy group that supports economic equality, found that length of homeownership was one of the primary factors that contributed to the wealth gap between Blacks and Whites. The Black homeownership rate is nearly 30 percent lower than the homeownership rate for Whites.

The IASP also reported that some White families had access to family inheritances to help pay for home purchases that helped them build home equity much faster than Blacks.

And that comes at a price.

“Ultimately, it hinders the economy through fewer new home sales, and less spending on the myriad of items that go along with home purchases,” said the Urban Institute report. “There is an urgent need to expand the credit box to improve opportunities for households to build wealth and strengthen the economic recovery.”