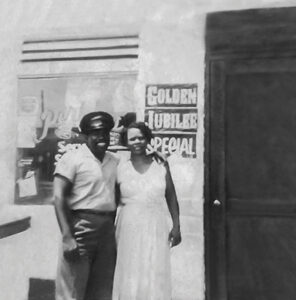 Robert and Trudie Perkins were known as the “civil-rights power couple of Tallahassee,” who were willing to risk everything to improve the lives of those in the city’s Black community.

Their names will be enshrined for future generations of residents and Florida A&M University (FAMU) students when Gamble Street, a main artery on the campus, will be renamed Robert and Trudie Perkins Way at a ceremony in front of the FAMU Welcome Center, 8:30 a.m. Friday, Sept 10. Robert and Trudie Perkins Way runs three-quarters of a mile, east-west from Martin Luther King Jr. Boulevard to FAMU Way.

“Gracing our campus with the new Robert and Trudie Perkins Way gives us the honor of recognizing a husband-and-wife team who contributed so much to positive change in this community,” FAMU President Larry Robinson, Ph.D., said. “They were tireless in their advocacy and relentless in their fight for social justice and economic equality.”

The day marks what would have been the couple’s 75th anniversary and is an attempt to honor those who have led the struggle for equal and civil rights while severing ties with Tallahassee’s plantation past.

“They were civil rights icons before the civil rights movement,” said Delaitre Hollinger, a local historian who is executive director of the National Association for the Preservation of African American History and Culture.

A look in the rear-view mirror

The street was named for Major Robert Gamble, an officer in the Con-federate cause who operated a sugar plantation for 12 years in Ellenton, Florida. Records show that in 1855, Gamble owned 151 enslaved people. The following year, deep in debt as sugar prices sank, Gamble was forced to sell the plantation and its assets, including all of the enslaved.

Robert and Trudie Perkins earned their place in history by their selfless actions. In the early 1950s, Robert Perkins, a graduate of what was then Florida A&M College for Negroes (FAMC) drove a truckful of Black children from the Bond community to some of the city’s white recreational facilities. An act of defiance that was met with strong opposition. In the end, Perkins’ move led to the creation in 1954 of the Jake Gaither Park and Recreation for Negroes, now the Jake Gaither Recreation Center and Golf Course. For the ensuing three decades, there were many other battles – some of which reached the U.S. Supreme Court, with Perkins representing himself all the way.

Trudie Perkins was one of the first Black nurses to work at Tallahassee Memo-rial Hospital. Along with co-worker Lizzy Smith, she fought for better working conditions and pay for Black nurses. While their efforts brought about significant change for others, the two were fired.

“Sometimes, God uses ordinary people to do extraordinary things,” said Jacqueline Perkins, one of the couple’s two surviving children. “My parents did a lot of things that no one knew about. They taught us that there was never anything that you can’t do.”

Robert Perkins taught mathematics and physics at his alma mater but quit after being asked to sign a loyalty form. Later, he also lost his job as the first Black director of the computer center at Florida State.

Despite the risks, the couple soldiered on. Their efforts led to the issuance of a federal consent decree, entered and ordered by the Department of Justice in April 1975. The Consent Decree mandated that the City of Tallahassee hire Blacks in all EEO job categories at a minimum level of 23.7 percent. This was proportionate to the city’s Black population at that time.

They owned a convenience store at Wahnish Way and Osceola Street. She ran a hair salon on the property, which also was home to Tallahassee’s only Black-owned gas station with three pumps. Robert Perkins died in 1994, Trudie Perkins in 2013.

“My parents were not social climbers, they were not joiners; they were just people trying to get things done,” said Jacqueline, who is one of five siblings. “When they saw there was a problem, they sought to solve it.”

While the 1960s civil rights activism of FAMU students is well-known, until now, the heroism of Robert and Trudie Perkins has been largely been overlooked.

One of the first steps that Jacqueline Perkins and Hollinger took to have Gamble’s name removed was to reach out to City Commissioner Dianne Williams-Cox, a FAMU alumna.

“It was a stigma for those who knew, but I’m proud that my beloved FAMU will not have a slave owner’s name running through it,” Williams-Cox said. “We know that there are others in our city. I don’t know where that is going to go, but right now, we are glad to have this one undone and put the names of folks who have helped our city and our community.”

On July 13, 2021, the Leon County Commission voted unanimously to rename Gamble Street for the couple as “indeed a fitting and proper tribute to the two FAMC graduates whose courageous actions led to the desegregation and diversification of the City of Tallahassee’s workforce. Their actions also impacted Leon County and the State of Florida.”

*The Florida Department of Health has suspended daily case and vaccine reports. The department will instead post weekly updates. The numbers reported here reflect the number of new cases and deaths for the previous week, August 20 – August 26. […]

Broward Health today donated $250,000 worth of PPE and medical supplies to support earthquake relief efforts in Haiti. About 60 pallets of supplies, including face masks, surgical gloves, ponchos, sanitizers, isolation gowns and other items that can be used for health care, COVID mitigation and preservation of health and wellness, were shared with Man Dodo and the Haitian American Nurses Association for distribution in Haiti. […]