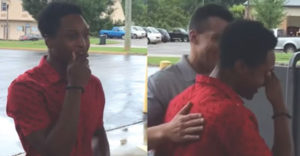 There are people with determination that you don’t easily find in your average human being. And such individuals are not easily deterred by adversities of any kind, no matter how difficult things turn out to be. An example of amazing individuals of this kind is Walter Carr, a resident of Homewood, Ala – who walked 20 miles to get to his job in Pelham. This is not fiction, but an actual true story of a young man who refused to complain and decided to do whatever it would take to keep his job.

Reports by AL.com had it that Carr’s predicament began after his car broke down the night before reporting to his new job. It had been a long time before he landed any job, and after getting hired by Bellhops moving company, he didn’t want to risk losing his job because he had no car. Undeterred by the situation, he chose to walk to Pelham; he started his journey at mid-night after four hours of sleep, walking through the night, across high-ways.

By 4 a.m. Carr was in Pelham, and on his way, he met four officers who stopped him out of concern. He explained his predicament to the officers and moved by his story, they decided to assist. One of them, Mark Knighten and his colleagues Klint Rhodes and Carl Perkinson, took the initiative to ensure the young man was safe. They took him to Whataburger and bought him breakfast and lunch to go. After which they drove him to a nearby Church, believing that it was better for him to stay there until it was safe to go to work.

Carr was sent by the moving company to assist Jenny Lamey, and after hearing of Carr’s story, she posted the incident on Facebook. She wrote, “[Carr] WALKED ALL NIGHT to get from Homewood to Pelham, because he needed to get to work.

For those reading this that are not local, that’s over 20 miles. You could tell how the officer told us this story that he had complete admiration for Walter and by my reaction he could tell I did too. The police officer said they picked him up earlier that morning, took him to get some breakfast and once they checked his story out, brought Walter to our house.”

Carr later received a car from his boss, Bellhops CEO Luke Marklin after he heard what happened. Marklin told Carr that he was driving over to Tennessee to thank him for his dedication over coffee. When he got there, however, Carr was surprised to receive from his boss, his own barely- driven 2014 Ford Escape. Marklin said of Carr, “I am honestly blown away by him. Everything he did that day is exactly who we are — heart and grit. So far, he’s batting 1,000.”

Carr, who is a college student, couldn’t believe it when he saw the car keys were handed over to him. He was heard saying, “Seriously?”

Talking to AL.com Carr said, “This was the first job in a long time to give me an opportunity to get hired. I wanted to show them I got the dedication. I said I’m going to get to this job one way or another.’ I want people to know this — no matter what the challenge is, you can break through the challenge. Nothing is impossible unless you make it impossible. You can do anything you set your mind to. I’ve got God by my side. I’m really emotional right now trying to hold back the tears.”