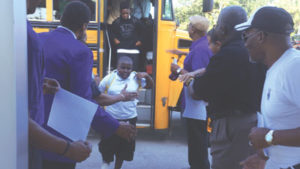 DELRAY BEACH, FL – An energetic crowd of men, including several community leaders, cheered and gave high-fives to students at two local schools on their first day 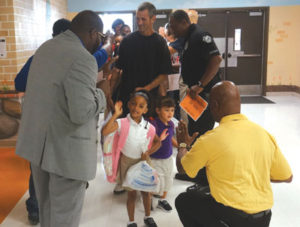 back from summer break.

Village Academy hosted the fourth annual “100 Men Welcome Back” to bring the men together to show students a supportive community is behind them.

Two women from the local affiliate of 100 Black Women of America also joined the men. 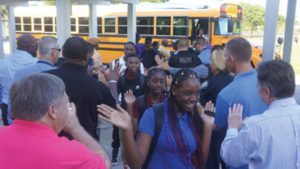 Across town, a sea of men also welcomed students back to Carver Middle School. This was the second year that Carver held the event.

Among the men were CEOs, an emergency room technician, several in suits, some in jeans, some in scrubs and several police and firefighters.

Asst. Police Chief Javaro Sims and fire chief Neal de Jesus were at Village Academy while Sims and interim police chief Mary Olsen welcomed students back at Carver Middle School. Some held posters which read: “We are proud of you,” “We Believe in You,” “Best Wishes this Year” and “Welcome Back.”

“We asked fathers, uncles, cousins, grandfathers, mentors and role models to come out and greet our students as they walk into the building,” Village Academy Principal LaToya T. Dixon said. “We want every student to know that we are investing in their education and that we are stressing the importance of coming to school ready to Work Hard, Be Good, and Think for the 2018-2019 school year.”

Like the students, some parents were surprised to see the welcome. Parent Saidah Simon was happy to see some diversity in the ranks.

“Last year it was mostly men and not many officers,” she said of the men at Village Academy. “But to see Delray Beach police here is a big encouragement to the kids. It says, ‘You can do it,’ and ‘We got your back,’ and ‘We are on your side.’”

Monday’s initiative, organized by KOP Mentoring Network, was part of a nationwide move to enhance parent involvement and promote volunteerism in our schools. It was also an attempt to push forward a new image for black men and fight racial stereotypes, organizers said.

A Florida Department of Education study found a positive correlation between family involvement and a student’s academic success. Further research also found that when fathers are actively involved in their child’s education, the student earn better grades, score higher on tests, enjoy school, has fewer discipline problems and are more likely to graduate from high school and attend college.

“Many of our students come from homes, where they do not have fathers as male role models,” said Cameron Simmons, the ESE coordinator at Carver Middle School and organizer of the 100 Men Welcome Back. “It is so important that all children have a positive male role model who is doing something good for them, something they can relate to, to give them the idea that they are worthwhile, and education is worthwhile.” It is important to have community supporters to stand in the gap for those students who lack role models, especially on such an important day as the first day of school.”