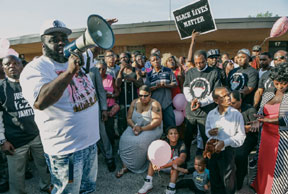 March organizer, This’l, addresses the crowd as the community comes to show their support for the family of Jamyla Bolden.        (Lawrence Bryant/St. Louis American)

By Kenya Vaughn, Special to the NNPA from the St. Louis American

Kendric Henderson’s face cringed as she slowly limped on crutches to join the march in memory of her daughter Jamyla Bolden Sunday afternoon. Although she herself had been shot in the leg by the same stray bullets that entered the family home and killed her last Tuesday night, the pain she expressed was also the result of a broken heart.

Henderson would ride in a pickup truck as several hundred marchers made the mile-long journey from the corner of Ellison and Canfield Drive to Koch Elementary School – where Jamyla had just started fourth grade – to release balloons in her memory.

The event was the brainchild of rapper This’l, an artist who has used his music to promote redemption from the ashes of urban decay.

For most of the march, chants that were the common soundtrack as protesters marched for Michael Brown Jr. were re-mixed for Jamyla.

“Jamyla means… ,” Rasheen Aldridge shouted. “We’ve got to fight back,” the crowd answered.

The call and response chants would continue uninterrupted for the entire march.

Marchers circled around the family once the last few filed in.

“We had a lot of things that we said, but what stands out are community and family,” Jamyla’s principal Howard Fields said as he addressed the crowd. “These are our streets and these are our school as well. I just ask that we continue to really exercise our muscle with regards to family and community and marrying that with school.”

The crowd responded with approval as if they were in Sunday worship service.

Tammie Holland of 100.3 The Beat urged everyone to be active seekers of justice for Jamyla.

“It would be so very unfortunate if this mother could not get closure – If you say something, say something. Holland said. “We cannot have a community and a culture where it is acceptable to kill our children. Today is far too beautiful for us to be standing here mourning for a child.”

A large constituency of the St. Louis Urban League was also on hand showing support.

“There are very few things as a grown man that make you speechless – and this is one of those things,” said Michael McMillan, president and CEO of the Urban League of Greater St. Louis.

McMillan added that the Urban League was adding $5000 to the reward fund for information leading to the capture of Jamyla’s killer – nearly doubling the total reward.

“We have to do better as a community to make sure that this never happens again,” McMillan said.

This’l offered a reality check to the crowd.

“When we were chanting we were saying they and them and show ‘them’ what justice looks like. But today, the ‘them’ is us – the ‘them’ is us today,” This’l said. “I grew up trappin’. I grew up gang banging and all of that.

But at a certain point I realized that my life wasn’t meant to be tearing down my community – as a culture, as a community and as a people we need to stop it too.”

The Legacy of Carter G. Woodson

The Legacy of Carter G. Woodson
[…]

On the second try, prosecutors secured a first degree murder conviction of Michael Dunn, the man who shot and killed 17-year-old Jordan Davis after a dispute over loud music at a Jacksonville convenience store. […]