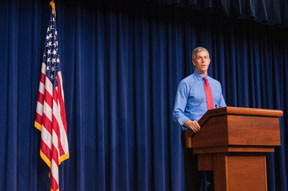 Congress struggles to replace No Child Left Behind

WASHINGTON, D.C. (NNPA) – As Congress works toward a comprehensive education policy that will replace the Bush Administration’s No Child Left Behind, two different bills from the House and Senate are up for consideration.

No Child Left Behind expired in 2007 – the law was the last time the original Elementary and Secondary Education Act of 1965 (ESEA) was renewed.

If either of the current proposals is signed into law in their current states, it could spell difficulties for Black and Brown children, according to Secretary of Education Arne Duncan.

“I always say that education is the civil rights issue of our time,” he said. “The next question we as a nation should be asking is whether Black children, Latino children… children around the nation – are they receiving the quality of education they need and deserve? And too often the honest answer is, not even close. There should be nothing political or ideological about this; this is a-bout fighting for kids’ educational opportunity.”

Secretary Duncan believes that Congress’ resistance to federal oversight will weaken whatever law is passed. Neither the House’s Student Success Act (SSA) nor the Senate’s Every Child Achieves Act (ECAA) gives the Department of Edu-cation the authority to hold states accountable for educational outcomes, create national standards/mandates, or pass judgment on a state’s education system.

Also, neither bill closes the ESEA’s “comparability loophole” – a loophole that allows states to skimp on state and local funding for needy schools, forcing them to rely heavily on federal Title I money. As a result, high-poverty schools remain under-resourced and saddled with underpaid, inexperienced teachers, because the state won’t match the federal funds.

“Education will always be a primarily a local issue, but [there is] a clear federal role here on several levels. First of all, taxpayers…are putting billions of dollars out to states every year for poor children, for English language learners, for children with special needs,” Duncan said in an interview with the NNPA News Service. “And there’s no real accountability. Transparency by itself doesn’t change a kid’s opportunities.”

The similarities between the laws end there.

In general, the SSA seeks highly flexible public education by prohibiting almost all federal involvement, allowing states to create and rely on their own education plans instead. There are guidelines for what these plans must address, including a system to find and correct racial disparities, or deal with ineffective teachers. But the bill painstakingly avoids telling states how they should meet these guidelines.

A state can also create whatever curriculum it wants – as long as it includes at least math, literacy, and science, and state tests to go along with the curriculum. States would also be largely responsible for holding themselves accountable for their own strategies and all students’ academic success. The Department of Education would only be responsible for reviewing the states’ self-evaluations to make sure tax dollars aren’t misused. In that case, Secretary Duncan is only allowed to issue recommendations and public reports.

“House Republicans have chosen to take a bad bill and make it even worse,” Duncan said in a statement after the SSA was passed in the House. “This bill – which was passed in an entirely partisan fashion – represents a huge step backward for America’s students. They deserve better.”

The Senate’s ECAA attempts to provide state flexibility and more support than No Child Left Behind did, while still providing some federal guidelines. For example, while states would create their plans, the plans must be aligned with college entrance requirements or career/vocational education standards, and must include high standards for early childhood education programs, students with disabilities, and English language learners.

Under the bill, states are encouraged to use a variety of data in fostering and measuring student achievement, including projects, portfolios, and annual state exams. Both states and the Department of Education would share “best practices” from schools around the country.

The ECAA also sets aside funds solely for states to reward the best teachers and supports and interventions for less effective ones. Additionally, the state plans must distinguish between low-performing schools and those that need support for less-controllable factors, such as a high migrant student population.

Even the bill’s supporters have reservations, however. Last month, the Congressional Tri-Caucus, a coalition of the Black, Asian, and Latino Congressional caucuses, issued an open letter stating that while they appreciate the bill’s bipartisanship, it does not yet “do enough to protect the historically disadvantaged and vulnerable students the ESEA is intended to serve.”

A few amendments have been made since then, including guidelines for disabled students, increased access to STEM lessons and opportunities for “underrepresented” students, and better means of identifying and supporting homeless students.

Duncan hopes the final law will draw on best practices from school districts around the nation; cap the amount of time spent on standardized testing; close the comparability loophole; compel states to intervene and support the lowest-performing five percent of its schools; and grant the Department of Education Department the authority to implement and enforce these benchmarks.

The Senate will likely vote on a final version of the ECAA this week. When it does, key members of both chambers will have to find a way to combine their proposals and send one bill out for the President’s signature. If he rejects it, it’s back to the drawing board – or the ESEA just won’t be reauthorized anytime soon.

“Everyone has their opinions and debate is healthy and important. So I’ll just [reiterate], this is a civil rights law,” Duncan told the NNPA News Service. “This is fighting to increase equity and opportunity so that every child has chance at life. Educational opportunity has to be the equalizer in our nation, the one thing that will help equality the gap between the haves and have-nots.”