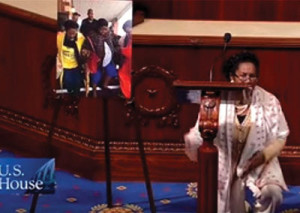 Rep. Sheila Jackson Lee, D-Texas, took a knee on the House floor Monday night in support of NFL players who knelt during the national anthem following Donald Trump’s criticism of the protest.

“There is no basis in the First Amendment that says that you cannot kneel on the national anthem or in front of the flag,” she said.

“There is no regulation that says that these young men cannot stand against the dishonoring of their mothers by you calling them to fire the son of a B,” she said. “You tell me which of those children’s mothers is a B—-. That is racism.”

From the ground, Lee explained that she was kneeling to honor freedom.

The sentiment was echoed by fellow Black Caucus member Rep. John Lewis, who later tweeted that there is “nothing wrong with kneeling down to stand up against injustice.”

See video of Rep. Jackson Lee kneeling on the House Floor at: www.thewestsidegazette.com.