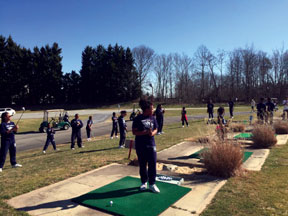 Craig Kirby is on a mission: He is working hard to diversify golf — one Black student at a time.

His non-profit, “Golf. My Future. My Game,” has exposed young African-Americans to the predominantly white sport since 2014.

Kirby’s goal is to teach kids of color to play golf while helping them envision careers in that industry. Each of his 12-week classes enrolls about 80 students.

“We take our kids to golf courses and give them a whole new experience,” Kirby said in his Washington, D.C. office. “They get lessons, guidance and advice from experts in the golf industry who look like them.”

Kirby provides life chances for young people on the golf course and behind the scenes, as everything from golf-club owners and professional caddies to golf-wear designers. He also educates them about college golf scholarships.

Among America’s 15,000 private golf courses, only four are Black-owned, Kirby said. He takes his students to one of them, the Marlton Golf Club in Upper Marlboro, Maryland.

“We teach them the game of golf, the business of golf — from soup to nuts,” he said. “They learn everything — from the pro shop to the cart shop, to the back office and everything in between. It’s a complete golf experience. If kids don’t want to play golf professionally, there are plenty of great jobs in the golf industry.”

“These numbers are not disappointing,” Kirby said with a smile. “These are avenues of opportunities for kids of color.”

Cooper, 60, who has played golf for 48 years, said very little has changed in the industry since he first researched its demographics in 2003.

“If we can broaden our reach, we can crack through this barrier,” said Cooper, a Springfield College-Tampa Bay professor who collects diversity data for the World Golf Foundation. “I like what Craig is doing. He brings a breath of fresh air into the golf industry.”

“He introduced us to golf,” she said. “I liked what he talked about. He mainly talked about courtesy and respect and told us about the sport. I might be interested in caddying.”

Kirby’s concept is not new. The First Tee has similar objectives. However, Kirby’s foundation is getting positive attention.

“Because it’s time,” Kirby said. “Here we are, 20 years after Tiger Woods’ win at the Masters. And because I feel in my spirit that this is what God has put me on this Earth to do.”

World Golf Foundation CEO Steve Mona said he enjoys giving Kirby a national platform to grow his program and introducing him to some of golf’s leaders.

“Traditionally, the golf industry has not been as diverse as we would like,” Mona said. “For the game to reach its full potential, it needs to look like America.”

“We want to make sure golf reflects the diversity of our country and, ultimately, it’s good for the game,” he said. “Craig is using golf as a vehicle to expose young people to careers in golf. He’s doing it for the right reasons.”

“My background is in politics, so I believe strongly in the ground game — the door-to-door approach to spreading your message,” Kirby said. “I am taking all that I have learned within that arena and updating it to fit the way people communicate today.”

He said he was encouraged to continue his work, in part, after a friend described the importance of exposing young African-Americans to golf —  and keeping them off the streets.

“He said kids can’t get shot on a golf course,” Kirby said. “He was absolutely right.”