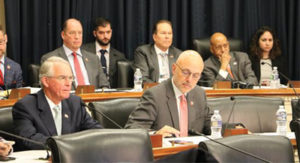 On Friday, March 8th, House Democrats passed H.R.1, the For the People Act. This historic bill is one of the most sweeping reform packages to pass the U.S. House of Representatives in the past half century. H.R.1 will return the American political system to the people by ensuring that every eligible American can cast a ballot, while pushing back against the corrupting influence of big money in politics.

For too long, our country has lurched increasingly towards the interests of the privileged and the powerful. I was proud to cast my vote in favor of this bill and will continue to prioritize reforms that strengthen our democracy, so that all American voices can be heard.

Passage of H.R.1 comes on the heels of last month’s passage of H.R. 8, the Bipartisan Backgrounds Checks Act of 2019 – the most significant gun control reform legislation to pass the House of Representatives in more than a decade. H.R.8 would close the loophole that allows unlicensed gun sellers to bypass a background check, ensuring that individuals prohibited from owning firearms are unable to obtain them. Make no mistake: this bill will save American lives. It is imperative that we continue to do all that we can to end gun violence. I will continue to champion common sense reforms like this one. One life lost to gun violence is one too many.

As Dean and Co-Chairman of the Florida Congressional delegation, I hosted the first meeting of the 116th Congress on February 27th focusing on water quality issues facing our state. Along with my distinguished Co-Chair, Representative Vern Buchanan (R-FL), the meeting addressed pressing concerns such as red tide, oil drilling and harmful algal blooms in our state. Panelists included a diverse range of experts from the Department of the Interior, Army Corps of Engineers, the Florida Department of Environmental Protection, Mote Marine Laboratory and Aquarium, and the Nature Conservancy. Water quality affects all Floridians regardless of political affiliation, and our delegation is committed to finding bipartisan solutions to safeguard coastal communities, ensure access to clean water, and sustain tourism, wildlife, recreation, and fishing throughout our state.

Legislation in Focus: The Restoring the Partnership for County Health Care Costs Act of 2019

In February, I introduced H.R.1345, the Restoring the Partnership for County Health Care Costs Act of 2019. This bill would prohibit the federal government from stripping pre-trial individuals in county jails of their Medicare, Medicaid, CHIP, and SSI benefits, before an inmate has been convicted of a crime.

The U.S. Supreme Court’s interpretation of the Constitution’s 8th Amendment requires government entities to provide medical care to all inmates. With current law allowing the federal government to cut off important safety net resources, local governments are burdened with the expense of providing health care to thousands of men, women, and juveniles currently awaiting trial, while also trying to manage widespread budget deficits and cuts to essential services.

We must remember that although these inmates are incarcerated, some for over a year, they are innocent until proven guilty and the termination of their benefits could very well undermine this cardinal presumption, while disproportionately affecting low-income and minority populations. There is no question that the denial of access to fundamental programs and the erosion of the presumption of innocence are an affront to our sense of justice and our stated commitment to the rule of law.

For more information on the various issues that I am working on, visit my official website at www.alceehastings.house.gov

With warm personal regards, I remain,