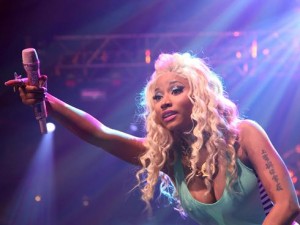 If Nicki Minaj thought she’d send the political world and the blogosphere into an incredulous swoon with her profane “endorsement” of Republican presidential candidate Mitt Romney, well, she was right.

Bloggers and politicos have been swooning for hours today and they’re still no closer to determining whether Minaj is really for Mitt, or whether it’s just another ironic stunt by one of her performing alter egos.

All those four-letter words in her “endorsement” would suggest the latter. And the clean-cut, clean-mouthed Mitt Romney, who’s more a “Golly!” guy than an expletive-deleted guy, is no doubt wondering who the heck Nicki Minaj is.

For the record, she’s a musician/rapper, and a wildly popular one at that (and she may soon be a judge on wildly popular American Idol). She’s also a wild performer, with daffy outfits and sometimes toxic lyrics. Her latest Exhibit A is her appearance on Lil Wayne’s (he’s another rapper, Mitt) new mixtape release, Dedication 4, which came out Monday.

Golly! Or words to that effect rushed around the Twitterverse, political blogs (most of them up to now focused on the Democrats’ convention in Charlotte) and media websites.

Gawker, tongue-in-cheek, tried to fact-check her. New York magazine noted that Minaj has previously tweeted that President Obama’s health care plan should have gone further. Vanity Fair tweeted that so far “Internet (and presumably Mitt Romney) Confused” about what Minaj might be up to. Politico, which reported the Minaj “endorsement” late Monday, today rounded up the “best tweets” from other politicos reacting to the news. The best one had to be from The Wall Street Journal‘s Lyneka Little.

“[I]n the same rap, Minaj also mentions hanging out with zombies, so it’s hard to say exactly what it all means,” she points out.

Naturally, a zillion calls went out to Minaj and her publicists asking, in less polite terms, are you serious? So far, no response, and she did not enlighten via her Twitter account. But here’s the number Romney and his campaign might want to know: She has 14.3 million followers. Presidential elections have been won by less. Way less

Romney did Obama a huge favor

In a classic “Saturday Night Live” sketch, Christopher Walken plays a music producer with just one message for his bands: “More cowbell! I gotta have more cowbell!” […]

What sorrow awaits you who lie awake at night, thinking up evil plans. You rise at dawn and hurry to carry them out, simply because you have the power to do so. — Micah 2:1New Living Translation […]

President Clinton explains Mitt Romney’s $5 trillion tax cut and how middle class families with children will get an average tax increase of $2,000 to pay for $250,000 in tax cuts for multi-millionaires. As President […]