Miami did not come to play Sunday. Aside from 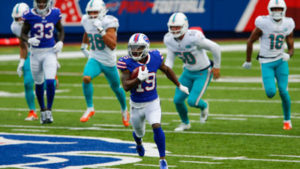 getting two interceptions the defense completely unraveled. Josh Allen started the game passing for 224 yards, completing 18 of 25 passes, and throwing for 3 touchdowns and an interception. As the backup Matt Barkley came in the third quarter and passed for 164 yards, one touchdown and one interception. The defense could not stop Buffalo on offense, giving up touchdown after touchdown (4 passing, 2 rushing, a punt return, and an interception return). Buffalo was up 28 to 6 at halftime, scoring all 28 points in the second quarter. In the third quarter, Miami only allowed one touchdown while only scoring one touchdown. In the fourth, Buffalo managed to score 4 touchdowns blowing out the Dolphins 56 to 26. Head Coach Brian Flores offered his thoughts on Miami’s performance. ““We didn’t play well in any phase – offense, defense, special teams. It’s a team effort. They talk about the offense, we’ll talk about the defense, we’ll talk about the special teams. I didn’t do a good enough job of getting 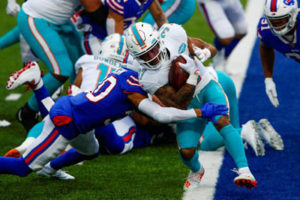 Although Tua passed for 361 yards, he also threw one touchdown and 3 interceptions. This loss will be a learning experience for the rookie quarterback and the team. I think the Dolphins can make a few changes and improve their record next season. With one year under his belt, I

hope Tua can improve and continue to get better; now he will be expected to be the full time starter and more will be added to his plate. Better Luck next year Miami.