http://audiodescription.co.uk/directory/describers/certificate-in-audio-description-skills-stage/theatre/ http://audiodescription.co.uk/directory/describers/certificate-in-audio-description-skills-stage/theatre/ Buffalo came down to face Miami for their second match-up this season, and both were wins for the Bills. Ryan Fitzpatrick was under center for both games, throwing for more passing yards this game but had no touchdowns or interceptions. The Dolphins were counting on Fitzmagic to produce some touchdown passes but it didn’t happen. He gained passing yards, but yards don’t put points on the board. For the game Fitzpatrick was 32 of 45 for 323 yards. He was also sacked 7 times. Josh Allen  had a good game for Buffalo, not only was he 21 of 33 for 256 yards and 3 touchdowns but he also had 56 rushing yards. His favorite target was John Brown who had a big game against the Dolphins defense 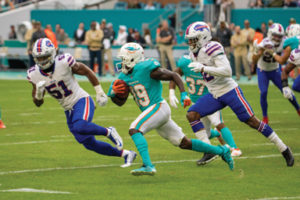 with 137 receiving yards on 9 receptions and two touchdowns. Head Coach Brian Flores has his thoughts on the game. “We’ve got to do a better job protecting the quarterback, getting the ball out quicker. We just didn’t play well; but it wasn’t just them. We didn’t play well collectively as a team all the way across the board. It starts with me. We’ve got to coach it better, got to play better – fundamentals, technique, communication, all the way across the board – we’ve got to do it all better.” 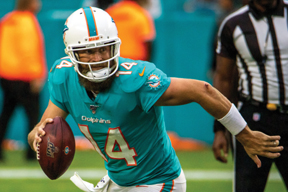 Overall, the passing game was average, many yards but no touchdowns. DeVante Parker had a very good game with 135 receiving yards on 7 receptions. This was a career high for him; he says he can still make plays when needed and he has a lot left in him. Next game they have to find a way to put touchdowns on the end of it. The running game put points on the board, but it was overall ineffective. Between 4 running backs, they only have a total of 23 rushing yards and  two touchdowns. With only 23 rushing yards, it’s going to be hard to beat anybody. 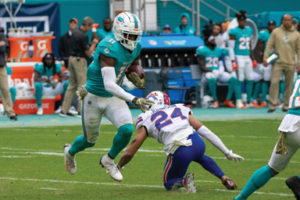 At halftime it was still a close game with the score being 23 to 14. Jakeem returned a kickoff 101 yards for the score with 1:23 on the clock. This seemed like it would give them a spark cutting into the lead before the half. Jakeem offers his thoughts on the play. “Like (Head) Coach (Brian Flores) said, when one side is struggling or both sides are struggling, we have to make some-thing happen and I feel like, collectively, as a special teams unit, that’s what we did. So, we got the momentum in our favor and next time we do, we have to be able to keep it.” 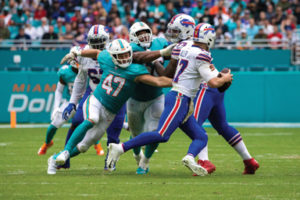 Next Sunday the Dolphins travel to Cleveland to take on the Browns. Jarvis Landry, the former Dolphin, will face  his old team, and he will be motivated to have a big game. It will be tough game because it’s on the road, so they have to put this lost behind them and focus on the Browns. Can they pull out a tough road win? Tune in next week to find out.