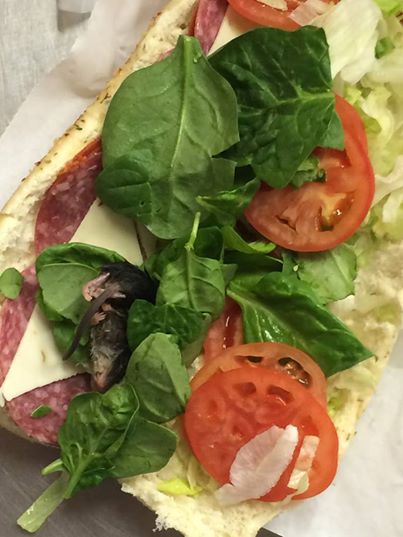 Look at that Beast of a mouse in the spinach at Subway today! Good thing we didn’t bite into it! AMAZING! WTF!!! The manager was in shock!

Instead of getting jalapeños or banana peppers, one Subway customer in Oregon got a dead mouse in his sandwich. The unlucky guy, Jay Armstead, found a dripping wet mouse sandwiched between his spinach and tomatoes.

Jay and his friend Matt Jones stopped by a Subway in Lincoln City after work on October 6. He told the NY Daily News that he hadn’t eaten in seven hours, and ordered his usual Italian sub with spinach – a morning staple. After getting his sandwich he noticed the rodent, and his friend quickly snapped a picture and put it on Facebook, with the caption, “Look at that Beast of a mouse in the spinach at Subway today! Good thing we didn’t bite into it.”

After notifying the staff, the manager was just as alarmed as the customers. The manager apologized and offered him another sandwich, but he smartly declined.

Instead, Jay decided to go home to make sausages.