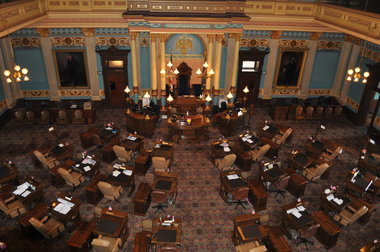 Posting or forwarding this material without permission is prohibited. Contactnews@newsserviceflorida.com.

THE CAPITAL, TALLAHASSEE, April 24, 2013……..A bill aimed at fixing the snafus that plagued Florida’s 2012 elections cleared the Senate on a party-line vote Wednesday, though it’s not clear how close the measure is to becoming law.

The legislation (HB 7013), which passed 26-13, would give county supervisors the ability to offer as many as 14 days of early voting, though they could remain at the current eight; would allow for more flexibility in selecting early voting sites; and would limit the first proposed ballot summary of a constitutional amendment proposed by the Legislature to 75 words.

It follows an election that included lengthy lines that kept some voters from casting ballots until after President Barack Obama had been projected the nationwide winner and delayed Florida’s final results until well after the election had been decided.

Republicans insist that the bill will largely solve the problems while still providing local supervisors of elections with enough flexibility to manage the balloting.

But Democrats have denounced the bill as a half-measure that won’t fix the entire problem.

They said the Legislature should completely roll back House Bill 1355, a 2011 measure that reduced the number of early voting days and made a raft of other changes to the state’s elections code, some of which have been blocked by the courts.

The Florida Democratic Party issued a blistering statement of its own.

“Today, Republicans showed their true colors with a bill that barely scratches the surface of fixing one of the most blatant attacks on Floridian’s right to vote,” Executive Director Scott Arceneaux said. “Republicans don’t want real elections reform, they don’t want to own up to their mistakes — they just want to cross this off their list and go home.”

But the issue has divided Democrats and some of their close allies on the issue.

House Democrats voted unanimously for similar legislation when it passed that chamber, and Common Cause Florida issued a statement praising the bill after Latvala dropped language that would have limited how many voters any individual could assist.

Several voting-rights organizations had said that would trample on efforts to help voters for whom English is a second language.

Brad Ashwell of Common Cause conceded the bill could do more.

“But at the end of the day, the bill that the Senate has produced contains a number of improvements to current law and today’s amendment fixes the one serious problem in the bill,” Ashwell said.

The measure still has to go back through the House, where lawmakers will have to consider some changes to the bill. House Speaker Will Weatherford, R-Wesley Chapel, said his chamber was still analyzing the Senate version.

“There may or may not be one more pass on the elections bill, but I think it’s priority of [Senate President Don Gaetz] and I want to make sure that we have an elections bill on the desk of the governor after session comes to sine die,” Weatherford said.

By JIM TURNER THE NEWS SERVICE OF FLORIDA THE CAPITAL, TALLAHASSEE, May 21, 2013 ……… Florida was shut out Tuesday by the National Football League and Major League Soccer. The NFL awarded the 2016 Super Bowl to […]

By DAVID ROYSE THE NEWS SERVICE OF FLORIDA THE CAPITAL, TALLAHASSEE, April 16, 2013……Texting while driving in most cases would be illegal in Florida under a bill passed Tuesday by the Senate and sent to […]