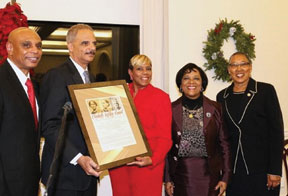 The Elizabeth Keckley Awards™ are named for a woman who was born a slave in 1818, in Virginia, who managed to purchase her freedom and become the premiere clothing designer for Mrs. Abraham Lincoln. Mrs. Keckley is the symbol of Black Women for Positive Change, a national/global civic network working to “Change the Culture of Violence in America, and the World”; and to “Preserve and Strengthen the American Middle/Working Class.”

In a joint statement, Black Women for Positive Change Co-Chairs Delegate Daun S. Hester and Dr. Stephanie E. Myers said, “It is a pleasure to honor outstanding individuals with Elizabeth Keckley Awards, for their role in preserving and strengthening the middle, working classes. Our honorees have operated at the highest levels of government, media, business and faith institutions. The Honorable Eric Holder, Rev. Aisha Karimah, Stan Jackson and Jake Oliver are leaders of great stature and yet, they show great humility.

Our youth need to see men and women who place a priority on leading institutions, providing jobs, developing neighborhoods and teaching principals of faith. We, the Black Women for Positive Change and our member Good Brothers salute our honorees.”

For more information about Black Women for Positive Change go to www.blackwomenforpositivechange.org.

Blacks gain most from Obamacare when Medicaid expanded

Blacks have the most to gain from the Patient Protection and Affordable Care Act (ACA) if the states they live in expand Medicaid under the law. […]

Connie, siddeeq and you

Connie, siddeeq and you
[…]