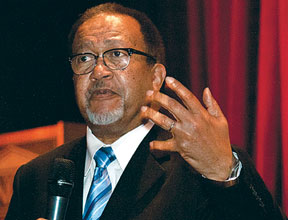 Enhancing Black-owned print in the age of social media

Dr. Benjamin F. Chavis Jr., says that the challenge of linking social media with the world of the Black Press in print, while formidable, will be a growing opportunity to enhance the future economic sustainability of Black-owned newspapers.

The National Newspaper Publishers Association (NNPA) salutes the career development success of the Discover the Unexpected (DTU) NNPA Journalism Fellowship program that has just completed its first term of providing undergraduate students at the Howard University School of Communication the unique apprentice opportunity to work at NNPA member newspapers in Chicago, Atlanta, Washington, DC, and Detroit.

One mutual benefit that emerged during the labor and service rendered by the DTU NNPA fellows was their daily increase in utilizing social media as an integral component of their career journey while working for Black owned newspapers. Both the fellows and our newspapers benefited from having these gifted and talented millennials in our workplaces during the past six weeks.

It was a summer of news reporting. It was a journalistic “Freedom Summer.” It was a print, digital and social media summer.

Brandi Montgomery and Brelaun Douglas were at The Atlanta Voice; Briahnna Brown and Mckenzie Marshall at the Chicago Defender; Victoria Jones and Rushawn Walters at The Washington Informer; and, Tatyana Hopkins and Sidnee King were at the Michigan Chronicle. In addition to writing front page news stories pertinent to improving the quality of life of Black America, all of the NNPA fellows were actively engaged on Facebook, Twitter, Instagram, Google, LinkedIn, Snapchat, and Youtube.

Most of the 209 Black owned newspapers that are affiliated with the NNPA now have active websites with various degrees of interactivity and digital capabilities. But the challenge of linking social media with the world of the Black print press, while formidable, will be a growing opportunity to enhance the future economic sustainability of Black owned newspapers.

One goal that the NNPA is now actively planning and researching is how to effectively and efficiently establish the NNPA Digital Network (DigitalNetwork@nnpa.org). The truth is that by having the DTU fellows working at some of our members’ newspapers has helped to crystallize the need and the opportunity for the timely development of the NNPA Digital Network. Again the digital network is not to replace or to supplant the NNPA’s print network of 209 Black owned newspapers. The digital network will help to increase the market value of the trusted content of NNPA member newspapers.

We are living at a time when candidates to be President of the United States routinely communicate to their constituents and supporters via Twitter, Facebook, Google and Instagram. The national and global news cycles are now ten seconds in length. Yet, there is still market demand from millions of people across the United States and throughout the world for more in-depth and detailed news accounts of what is happening in a rapidly changing and challenging world.

Black-owned newspapers in print and their online editions provide in-depth news coverage and uplifts the cultural genius of Black America as part of the long unique and respected tradition of the Black Press of America. From our perspective, we are encouraged by the emergence of committed student journalists like our DTU fellows. The future maybe challenging but the opportunities to soar with success and progress are much greater.

The National Newspaper Publishers Association (NNPA) will honor Senator Kamala Harris (D-Calif.) with the 2018 Newsmaker of the Year Award during the NNPA’s 2018 Black Press Week […]