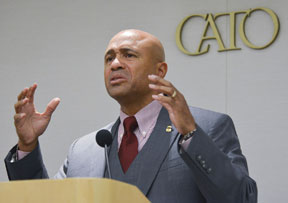 Neill Franklin, executive director of Law Enforcement Against Prohibition, speaks on the important relationship between police and the communities they serve during a panel discussion at the Cato Institute.  (Freddie Allen/NNPA)

WASHINGTON, D.C. (NNPA) – Neill Franklin says there is nothing new about friction between law enforcement agencies and Blacks. And he should know – Franklin is a 34-year law enforcement veteran of the Maryland State Police and the Baltimore Police Department.

“This is nothing new,” said Franklin, during a panel discussion on the shooting death of Michael Brown and police misconduct hosted by the Cato Institute, a libertarian Washington, D.C.-based think tank.

On Aug. 9, just after 12 p.m., Brown, an unarmed Black teenager, was shot to death by Darren Wilson, a hite, and six-year veteran police officer in Ferguson, Mo. The police left Brown’s body in the street for more than four hours, as shocked residents captured video and photographs of the scene and uploaded the images to social media websites. Brown’s death came less than a month after four unarmed Black men were killed across the country by police officers in controversial confrontations that sparked protests and marches.

Tim Lynch, the director of Cato Institute’s criminal justice project, said that the media didn’t descend on Ferguson because of the shooting of Michael Brown. He said, “They descended on Ferguson, because of the protests that erupted in the aftermath of that shooting.”

Lynch said that the media wanted to zero-in on why people were protesting, partly because the way the police were handling the case, leaving Brown’s body laying in the street for such a long period hours, then releasing videotape from an alleged robbery and claiming that the robber was Brown.

Franklin said that Blacks have always been viewed a little differently as far back as you want to go. He also expressed skepticism about Ferguson Police Chief Thomas Jackson’s decision to release a video allegedly showing Brown stealing a box of cigars from a convenience store less than 30 minutes before his fatal encounter with Officer Darren Wilson. Jackson released the video, against the advice of the Justice Department, even though he acknowledged that even if true, the alleged robbery was unrelated to the shooting of Brown.

Lauren Burke, freelance journalist and founder of the Crewof42.com, a news website that covers the work of Black members of Congress and focuses on issues that impact urban communities, said that racism is always a factor in cases similar to the shooting death of Michael Brown.

“It’s something that people don’t want to completely confront at any time, but when you look at the situation around Ferguson, you have to understand that not only are there two forms of policing in the United States, but many police are looking at African American males differently before anything even happens,” said Burke.

Lynch noted that the white middle class experience with police is very different from the experiences of minorities, many of whom live in the poorest sections of our cities.

“For the white middle class, it’s mainly the occasional speeding ticket, or perhaps there is a friend or a relative that gets involved with a DUI arrest, but for poor minorities, their experience is very different,” said Lynch. “This is where the ‘stop and frisk’ tactics come into play and the ‘no-knock raids’ on apartments and homes [are used].”

Police Goffman, professor of sociology at the University of Wisconsin at Madison, said officially, we have one system of justice in America, where we’re all held to the same standards, we’ve all got the right to a trial, and if we’re convicted, there are mandatory minimums in place, so we’re all going to serve the same sentence.

But Goffman disagreed, saying we have more than one sys-tem.

“One for white citizens and one for Black citizens and, particularly, a distinct form of justice for poor, African American citizens in this country,” said Goffman.

Although Blacks and Latinos have long been aware of these two parallel systems, said Goffman, large portions of the white American public continues to believe that we are living under the same laws.

Goffman said that the killing of Michael Brown pierced that notion and has made these two systems of justice front-page news.

“As soon as Ferguson happened, it seemed to be a giant crisis of credibility,” said Ethan Brown, an author and investigative reporter who has written for Wired, Rolling Stone, GQ, Mother Jones and the Village Voice.

Brown compared the credibility crisis between Ferguson residents and the police department to the credibility crisis that surfaced during the “Stop Snitchin’” street campaign, popularized in Baltimore, Md., nearly a decade ago. Brown, who wrote about the campaign said that a “Stop Snitchin’” DVD featured drug dealers griping about the illegal actions of William King and Antonio Murray, two Baltimore City Police Officers, who were later sentenced to hundreds of years, collectively, for crimes related to drug trafficking.

“A big part of the credibility crisis is the total lack of oversight that exists in every piece of the criminal justice system,” said Brown.

Franklin said that the strained relationship between police and the Black community in Baltimore morphed into other things. Residents soon refused to assist police officers in cases involving robberies, rapes and homicides.

“There is not a single law enforcement officer, police chief, or commander that will tell you that you can be effective in solving crime in any community without the cooperation of the citizens,” said Franklin.

In order to avoid more Fergusons and to improve bonds between police and residents, Franklin suggested increasing the use of civilian review boards in local police departments, connecting them to internal affairs agencies, and giving them subpoena power.

The veteran police officer said people need to realize that they do have power and that they can influence their local government.

“But you’ve got to organize,” explained Franklin. “You can’t be complacent and fall back to where you were. This type of change and organization should be an ongoing process for the rest of your life.”

“Organizing and ‘getting in the way,’ as John Lewis would say, is always necessary,” said Burke. “You gotta push these politicians you gotta make noise, you gotta organize and you gotta vote. And I don’t think voting is the only answer, but you have to push on specific issues.”