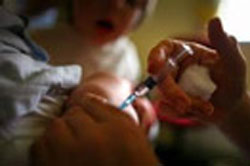 The U.S. Food and Drug Administration today approved Menhibrix, a combination vaccine for infants and children ages six weeks through 18 months, for prevention of invasive disease caused by Neisseria meningitides serogroups C and Y and Haemophilus influenza type b.

Diseases caused by the bacteria Neisseria meningitides (meningococcal disease) and Haemophilus influenzae type b (Hib disease) can be life-threatening. These bacteria can infect the bloodstream causing sepsis, and the lining that surrounds the brain and spinal cord causing meningitis. In young children, Neisseria meningitides and Haemophilus influenza type b are important causes of bacterial meningitis.

Without vaccination, children younger than two years are susceptible to these serious illnesses. Meningococcal and Hib diseases are particularly dangerous because both diseases often progress rapidly and can cause death or serious, long-lasting health consequences such as blindness, mental retardation, or amputations. Early symptoms for both diseases often are difficult to distinguish from other common childhood illnesses.

For the meningococcal component, study results showed that the vaccine produces anti-bodies in the blood at levels that are considered to be predictive of protection against invasive meningococcal disease caused by serogroups C and Y.

The safety of Menhibrix was evaluated in about 7,500 infants and toddlers in the U.S., Mexico and Australia. Common adverse reactions reported after administration of Menhibrix were pain, redness and swelling at the injection site, irritability and fever. Menhibrix is given as a four-dose series at 2, 4, 6 and 12 through 15 months of age. The first dose may be given as early as 6 weeks of age. The fourth dose may be given as late as 18 months of age.

Menhibrix is manufactured by GlaxoSmithKline Biologicals, based in Rixensart, Belgium.