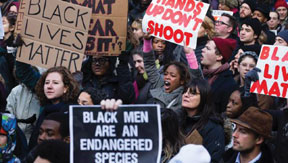 Ferguson under a Deep South mentality

Those who got caught up in the “Hands Up, Don’t Shoot” false narrative feeding frenzy surrounding the death of Michael Brown should read the Department of Justice report on the Ferguson, Mo. Police Department (FPD) — it’s not just the police!

It shows that Ferguson is really a 2015 version of a Deep South plantation. The question is, where have the NAACP, National Urban League, and state and local Black elected officials and community leaders been? This did not happen overnight.

The report states: “The harms of Ferguson’s police and court practices are borne disproportionately by African Americans, and there is evidence that this is due in part to intentional discrimination on the basis of race.”

Its municipal court operates as part of the police department and is supervised by the chief of police.

Is physically located within the police station and its court staff reports to the chief of police.

A municipal judge, nominated by the city manager, who is appointed by the elected city council, is elected by that same council for a two year term; the current judge has presided for “approximately 10 years.”

The court clerk who, under the supervision of the police chief, has authority to collect all fines and fees, accept guilty pleas, sign and issue subpoenas and approve bond determinations.

So why is this important? The municipal court has authority to issue and enforce judgments, issue search and arrest warrants and impose imprisonment for up to three months. As the report states, it is “not a neutral arbiter of the law.” It uses its authority as a means to compel payment of fines and fees that advance the city’s financial interests.

The report points out that the municipal judge, court clerk, prosecuting attorney, all assistant court clerks, and 50 of 54 sworn police offices are white. It is well known that the mayor, city manager, police chief and 5 of sic city council members are also white — this in a city that is 67 percent Black.

So why are these facts important? The report says that municipal court practices cause disproportionate harm to Black Americans who are:

The report adds that of those “actually arrested . . . only because of outstanding municipal warrant, 96 percent are African Americans.”

The report adds that of those “actually arrested . . . only because of outstanding municipal warrant, 96 percent are African Americans.”

It goes on to point out how the Ferguson Municipal Court serves as a collection agency using arrest warrants primarily as a means of securing payment of outstanding fines for municipal code violations. According to the court’s own data, as of December 2014, over 16,000 people had outstanding arrest warrants.

The role of warrants, as the report states, is “not to protect public safety but rather to facilitate fine collection.” So what happens?

FPD officers frequently “check individuals for warrants, even when the person is not reasonably suspected of engaging in any criminal activity.” If a municipal warrant exists, they are most likely arrested.

As to the FPD itself, the picture is dismal. The report’s findings include: The harms of Ferguson’s police and court practices are borne disproportionately by African Americans and there is evidence that this is due in no small part to intentional discrimination on the basis of race.  Officers violating the 4th Amendment in stopping people without reasonable suspicion, arresting them without probable cause, and using unreasonable force.

There has already been significant fallout from the report: the city manager and municipal court judge have resigned; the police chief will resign later this month; the Missouri Supreme Court appointed an appellate judge to preside over all cases in the city’s court and enact reform; and, two police officers have resigned and the top court clerk has been fired over racist emails.

The report concludes that “Ferguson as a city has the capacity to reform its approach to law enforcement.” As a city?

How about the people — especially the 67 percent Black population?

As long as just 6 percent of eligible Black voters vote in municipal election as was the case in 2013 when the current mayor was reelected, not much will change for Blacks in Ferguson. Maybe they need a special screening of the movie “Selma!”

Instead of protesting, blacks should take responsibility for their own political empowerment. Five people have filed an affidavit to recall the mayor. They have 60 days to collect the signatures of 15 percent of registered voters in the last mayoral election to prompt the special election.

Can Ferguson’s Black business owners, clergy and community leaders exercise the leadership to mobilize the community to get the necessary signatures for a recall and begin the process of taking back their government when national media, the Department of Justice, Al Sharpton and the “Hands Up Don’t Shoot” demagogues have long gone?

If not, there is little hope for change.

Clarence V. McKee is president of McKee Communications, Inc., a government, political, and media relations consulting firm in Florida. He held several positions in the Reagan administration as well as in the Reagan presidential campaigns and has appeared on many national and local media outlets. Read more reports from Clarence V. McKee