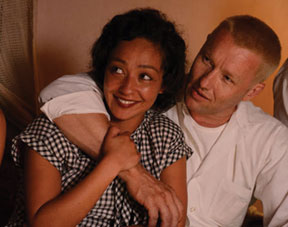 For a long time it was a forbidden love. Through slavery, the reconstruction era, on into the 20th century, particularly in the South, interracial romantic relations were looked down on and marriages were illegal. Anti-miscegenation laws were on the books in 16 states below the Mason-Dixon line. Marry someone not of your race and face jail time. Though several legal cases challenged those laws, none turned the tide until Loving v. Virginia in 1967.

The small town of Central Point, Virginia, 52 miles northeast of Richmond, was a bit of a utopia in the 1950s. Unlike other parts of the South, Black and White folks worked and lived together. Interracial friendships were normal. Loving relationships less so, but  not unheard of.

Mildred Jeter (Ruth Negga, “World War Z”), an African-American with some Rappahannock Native American blood, and Richard Loving (Joel Edgerton, “Black Mass,” “Zero Dark Thirty”), a White construction worker and brick mason were sweethearts. Folks knew it. Nobody said much. In 1958, she was just 18 and he was 25 when the two discovered she was pregnant. Knowing that Virginia’s Racial Integrity Act of 1924 banned interracial marriage, the two got hitched in Washington D.C.

Upon their return to Central Point, someone told the police that the two were cohabitating and married. One night cops raided their home and arrested them both, citing their non-compliance with Section 20-58 of the Virginia Code (which says it is illegal to marry out of state and return to Virginia) and Section 20-59 (which makes miscegenation a felony offense). Mildred and Richard were jail-ed. He was bailed out and not allowed to bail her out. She spent five days behind bars. A subsequent trial did not go well, and the opinion of Judge Leon M. Bazile was harsh: “ … The fact that he [God] separated the races shows that he did not intend for the races to mix.”

The Lovings, on the advice of their lawyer, pled guilty and were sentenced to a one-year prison term, which was suspended for 25 years as long as they left Virginia. They did, moving in with her relatives in D.C. But the fight for justice wasn’t over. It was Mildred, the quieter of the two, who set the wheels in motion to return to Virginia and bring their case to a higher authority.

The sensitive script by filmmaker Jeff Nichols (“Mud”) and his restrained direction set a tone that makes what’s on view seem so normal you’d think it could have happened to people down the street. His recreation of Central Point and its citizenry could almost play out today. Regular people, living and working together, defying stereotypes about racial polarization and making things work. According to conventional wisdom, perhaps it shouldn’t be happening. In real life it did and does. Legalizing a relationship that had lived under the radar causes the friction. Richard’s mother Lola (Sharon Blackwood) says in the most matter-of-fact-way: “You never should have married that girl.” Richard: “I thought you liked her?” Lola: “I like a lot of people. You never should have done it.”

For viewers looking for over-the-top racism, burning crosses, extreme violence, etc., be forewarned, that is not Nichols’ approach. In his own way, he will bring you to the forefront of racial prejudice, set up protagonists worthy of your empathy, develop antagonists who try to bring them down and dig head first into an intrinsic, systematic bigotry that festered in the South for years and years. In his vision, that horror is no match for a romance that is stronger than an evil.

Casting Ruth Negga was brilliant. If you go on YouTube and search for live footage of Mildred Loving, you’ll see that Negga captures her low-key simple essence and elegance superbly.

Negga, without histrionics, shows Mildred convincing her husband to fight the state of Virginia, handling the press like a media savvy public figure and staying determined that her family will be raised in her hometown. That zest for fairness and a dedication to the welfare of her children is worn on Negga’s face. Her tired eyes, her dignity and quiet determination is so evident and aptly represented in an understated performance that resonates.

Joel Edgerton also gives a reserved interpretation of a man set on pleasing his wife and children more than becoming a hero for interracial couples everywhere. His stone-faced, relaxed strength means he barely shares his feelings, rarely raises his voice, throws no punches but his courage is manifested by his deeds and the love he shows for his family.

Editor Julie Monroe clips away the excess down to 2 hours 3 minutes; time seems to flash by in an instant. David Wingo’s entrancing score heightens the drama and romance at the right times. Adam Stone’s cinematography gives the footage an aged look. Chad Keith’s production design and costumes by Erin Benach evoke working class Virginia and DC in exteriors, interiors and clothes that capture the spirit of the demographics.

The writing, direction, performances and production elements are filled with a grace that leaves a lasting impression. It’s as if the battle this unassuming couple waged must have been blessed from the start.

While studying at Florida A & M, Runette Lamone Hill found that her passion was teaching. She studied hard and learned well as she began a journey that would allow her to positively touch the lives of thousands of children. She was not only a light and a candle for us, she taught others how to shine. […]