The Washington Redskins could be breaking barriers with their next potential hire.

Written By A. Woods 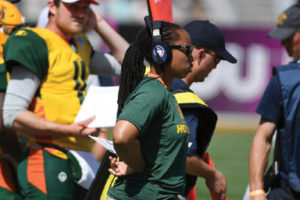 The Washington Redskins could be in the midst of making a game changing move with talks that their next hire will be the first Black woman assistant coach in the NFL. Jennifer King, the former coach of the Johnson & Wales University women’s basketball team in Charlotte, could be joining Redskins’ head coach Ron Rivera’s staff after working under him as a coaching intern, The Atlantic reports.

MORE: Does Jay-Z Play A Role In The NFL Hiring Black Coaches?

In 2017, King was invited to attend a forum hosted by the NFL during the Pro Bowl in Orlando. There, she met Rivera. “It was a great experience with a top notch organization,” King told 4 Down Nation last year. “I learned a lot from the coaches and receivers and formed great bonds there.”

King worked under Rivera with the Carolina Panthers in the summer of 2018 and 2019 and also holds a position as assistant offensive coach on the Dartmouth football team.

She worked with the Panthers receivers in 2018, and last summer she worked closely with their running backs coach Jake Peetz. “I was kind of timid at first, but then I noticed some things I was seeing I would hear somebody else tell them later,” King said told the Panthers site during her first summer with the franchise. “I was like, ‘I guess I should have shared that with them.’ I think the relationship with the players has been great. Our receiver room is a bunch of guys who are really hard-working. I think they are going to surprise a bunch of people this year because I think every position has talent and can really do some things.”

The Athletic reports that the deal could happen as soon as next week, not only making King the first Black woman assistant coach in the NFL, but the fourth woman in the league. She’ll be joining Tampa Bay Buccaneers Lori Locust, assistant defensive line coach; Maral Javadifar, assistant strength and conditioning coach; and San Francisco 49ers Katie Stowers, offensive assistant.

The North Carolina-na-tive’s coaching career star-ted as an assistant basketball coach at Greensboro College. She later became the head women’s basketball coach at Johnson and Wales University in Charlotte, according to 4 Down Nation. King has also played in the Women’s Football Alliance, a semi-professional football league. Within the league, she played quarterback, wide receiver and safety for the Carolina Phoenix in Greensboro where she went on to win two championships. She also won a national championship with the New York Sharks.

King told 4 Down Nation that she “definitely would like a shot back in the NFL,” and perhaps that was more foresight than foreshadow.