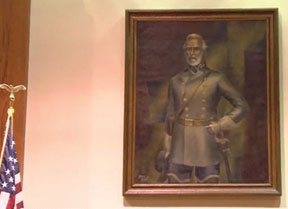 If members of the Lee County, Florida, branch of the NAACP have their waó, the Confederate uniform would be removed from a portrait of General Robert E. Lee that currently hangs in the county commission chambers, a local NBC affiliate reported Saturday. The move is part of the NAACP’s effort to purge the Confederacy from U.S. history in the wake of the shooting at a Charleston,

“What kind of impact our youngsters have when they go to the courthouse, and they see that symbol of a racist leader there in a public facility?” Kennix Roó asked. “She shouldn’t have to apologize for saying take it down.” While some are upset over the portrait, others say there are more important issues to be dealt with.

Florida NAACP invites Floridians to Get-On-The-Bus for Free to Journey for Justice Marches in South Carolina and Washington, D.C.

All Floridians are encouraged to Get-on-the-Bus to help mobilize the nation and demand a national policy agenda that protects your rights to a fair criminal justice system, access to the ballot box, sustainable jobs with a living wage, and equitable public education. […]