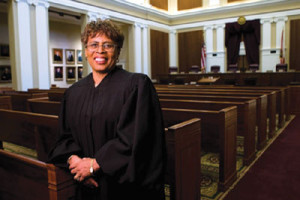 Florida Supreme Court Justice, Peggy Ann Quince, is the keynote speaker for the annual “A Fathers’ Affair” luncheon Saturday, June 3, 2017, 12 noon, at the Hyatt Regency Pier Sixty-Six. Justice Quince is an associate justice of the seven-member Florida Supreme Court. She was first appointed to the court in the state’s assisted appointment method of judicial selection on Dec. 8, 1998, by the late Governor Lawton Chiles and then Governor-elect Jeb Bush.  Justice Quince was retained in 2006 and 2012. Quince served as chief justice of the court from 2008 until 2010. Her current term expires in January, 2019.

The PEARLS Foundation in Collaboration with Upsilon Xi Omega Chapter of Alpha Kappa Alpha Sorority, Incorporated will honor men who are making an impact daily in the lives of others at the luncheon. They are Broward County Sheriff Scott Israel, Albert Tucker, and Sam Morrison.

Tickets may be purchased from Eventbrite or by calling TaShimba Andrews at (786) 768-8876.