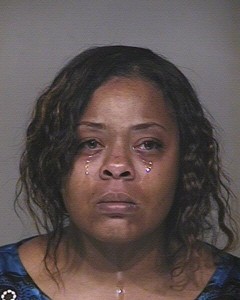 When the news broke that Scottsdale, Ariz., homeless Mom Buy Alprazolam Eu  Shenesha Taylor (pictured) had been arrested on March 27th because she left her two young children in her SUV with the doors locked and windows cracked while she went on a job interview, the story touched countless folks. Consequently, Amanda Bishop was inspired to start a fund for Taylor in order to cover the costs of her bail, legal costs, and living expenses, according to  Order Xanax Online Ireland YouCaring.com.

Buy Xanax Cod Delivery Taylor was cuffed by police after a bystander heard her 2-year-old and 6-month-old crying in her car. Taylor was then charged with two felony counts of child abuse and her children were placed in Child Protective Services.

Legal Order Xanax Online Canada Taylor had reportedly left her children in her SUV so that she could go to a job interview with an insurance company. According to police, Taylor told them she did not have a babysitter and was homeless. The 35-year-old Mom was reportedly at the interview for 45 minutes and the children had been in the vehicle for half an hour by the time police arrived.

http://bisnisbajumu.com/tag/bisnis-franchise Sargent http://learnwithojo.com/product/hide-seek-board/?add-to-cart=1547  Mark Clark, public information officer for Scottsdale Police, spoke to  http://tamaralounge.com/?y=Alprazolam-Powder-Buy WFSB about Taylor’s arrest,”She was upset. This is a sad situation all around. She said she was homeless, she needed the job. Obviously, not getting the job. So it’s just a sad situation.”

http://grosirrumahan.com/the-knights-who-say-ni-demand-a-sacrifice.html According to the Kids and Cars website, an average of 38 children suffer heat-related deaths every year, after being trapped inside motor vehicles.

http://learnwithojo.com/story Since the fund-raising effort began, donations have been pouring in, and at press time, there was $63,434 in the online YouCaring.com account set up for Taylor.

Meanwhile, Taylor reportedly remains in jail and will likely stay put until her first court date.