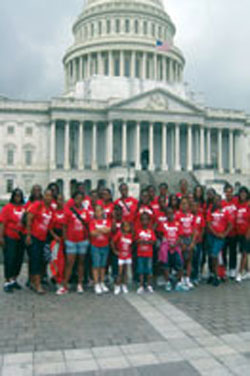 On June 7, 2012 the Girl Scouts of New Mount Olive Baptist Church embarked on a journey to Washington, D.C. for the 100th Year Anniversary of Girl Scouts. The five-day trip was filled with tours to places like the White House, the Capital Building, Mt. Vernon, Dr. Martin Luther King monument, Arlington National Cemetery, and Frederick Douglas’ home. Girls from each troop were included on the trip and the time spent together helped to strengthen our sisterhood.

The main reason we went was to celebrate the 100th Year Anniversary of our organization. The special event took place on June 9, 2012. We were on the mall in front of the Washington Monument. Over 250,000 girl scouts gathered from around the world to attend this momentous occasion. This event was what the honorary President of Girl Scouts, Mrs. Michelle Obama, would call “A day of play.” There was an all day sing-along as well as a flash mob for the Guinness Book of World Records, which we had the honor of participating in with other fellow scouts. The flash mob is a unique choreographed dance that was developed especially for the anniversary. Our troops practiced for three weeks and the flash mob was fun and an absolute success!

The trip consisted of multiple opportunities to learn some-thing new and each girl took advantage of every opportunity. The girls also learned new information even while dining. One of the hot spots they ate at was a well known landmark called Ben’s Chili Bowl that has been located on U street for 50 years and is still in business. This is the same restaurant where Bill Cosby and President Obama are frequent patrons. The manager [Mau-rice] at the restaurant gave the girls a history lesson of the place and told of all the trials they went through during the 1968 Washington riots and how with their faith in God they were able to pull through.

You’re probably wondering how we traveled there. Your first thought would be by airplane. But actually we took a train. Yes, 26 hours and it was worth every bit of the experience! The train rides provided an opportunity to bond and get to know the girls in our younger troops better. “Being with the older girls was lots of fun,” said India Miller, brownie girl scout.

The girl scouts also had a chance to explore the main city of Washington D.C. where they went to Frederick Douglass’ home, the Washington National Zoo, the Smithsonian, the Arlington National Cemetery, the Capital, and most importantly a White House visit, compliments of Congresswoman Debbie Wasserman-Shultz. Destiny Roberts, a daisy girl scout, stated one of her favorite sites was the White House. “I liked it because I got to see all the rooms. I liked the library best,” said Destiny. “I liked seeing the White House and the Capitol. I liked seeing the Capitol most because we got to see more,” added junior girl scout, Nyabi Stevens. At every location they were able to see and explore something different and that is what will make the trip a memorable one for both the girls and parents that went.

All of the girl scouts that participated in this trip are thankful for the support of their church, New Mount Olive Baptist Church, family, and friends and for being able to experience all that they did. They thank God for keeping them safe and for blessing them.

Road to AIDS 2012: A series of Town Hall Meetings—Las Vegas

The ninth in a series of articles about the Road to AIDS 2012, a 17-city tour that seeks to define the state of the U.S. epidemic and that leads up to the International AIDS Conference in Washington, D.C., in July 2012. […]

Before going to get a fresh cut or your “nails did,” you may want to consider this potential health concern. Customers in nail salons and barbershops may be at risk for hepatitis infection […]