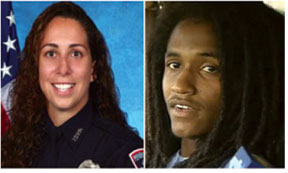 By Andrea Robinson, Special to the NNPA from the Miami Times

MIAMI (NNPA) – The incident at a Pembroke Pines Arby’s that recently caused a national uproar may be over for most, but a Miramar man says problems continue for his family.

Thomas McCutcheon on Monday said his grandson Kenneth “Kenny” Davenport is unjustly bearing the blame for accusations by a Pembroke Pines police officer that she was denied service because she is a cop. McCutcheon said media and Internet attention have wreaked havoc and that strangers are hurling racial slurs on his home telephone and harassing him and his family.

“This is about fair opportunities and to not profile people because they look a certain way,” he said.

McCutcheon said Davenport, 19, never spoke to Sgt. Jennifer Martin, an eight-year employee of the Pembroke Pines Police Department. He claims that she saw the teen’s dreadlocks and profiled him then filed the report. Now, he said, “rednecks” are calling his home “yelling n***r, n***r, n***r” and harassing them. He fears for the boy’s future.

“He’s trying to get things together. This put him in the spot-light in a negative way, which is where he doesn’t want to be,” said McCutcheon, who he’s raised along with two other grandchildren. “I want him to be respectful and courteous to all people.”

In a report filed by Martin, the officer said she attempted to order at the Arby’s drive-thru at Pembroke Lakes Mall, but the clerk seemed slightly rude and short with his responses. When she drove to the window, Davenport took her credit card. The shift manager, Angel Mirabal, came to the window and said, “He doesn’t want to serve you because you are a police officer.” Martin’s report says the incident was documented for informational purposes.

According to the statement, Davenport had gotten busy and asked the manager for help processing the police sergeant’s credit card. That’s when the manager jokingly told the sergeant that Davenport didn’t want to serve her.

News of that report set off wails of criticism with conservative media, law enforcement supporters and police unions. Brown met with police and union officials to discuss the matter.

Mirabal, 22, was fired, while Davenport received a two-week suspension with pay.

Now, Davenport, a recent graduate of Everglades High School, refuses to speak about the incident, either in person or over the telephone.

In an earlier interview with CBS 4, he said he couldn’t serve Martin because he was so busy with other customers that he had to ask his manager for help. Her line of work was not a factor. He also said his manager made a bad joke.

After that, Martin said she wasn’t certain she wanted to dine at the restaurant but the manager assured her every-thing was okay and handed the officer the food, according to the report.

Davenport’s grandfather, however, was eager to talk because he wants to clear the air for his grandson. He said the young man doesn’t understand the firestorm of criticism. “He’s through with it,” said McCutcheon, who described Kenny as a shy, soft-spoken teenager who rarely talks to anyone. “He was just doing his job. He was put in a very awkward position by being there.”

McCutcheon wants to discuss the matter with Martin and Giustino. No meeting is scheduled. However, in earlier media reports, Giustino said the matter is closed.

The incident still is buzzing in cyberspace. Social media response heavily sided with police officers after the release of the complaint. Davenport and Mirabal were excoriated from commenters local and abroad. Some posters, however, criticized the department for “overreacting.”

A week after the department’s last official statement, comments continue to trickle in on its Facebook page. Responding to a police department post about an upcoming Sept. 11 activity, a Nevada woman wrote, “So, you bruised egos over the Arby’s debacle ok? You think you can pull it together enough to show respect for the biggest national tragedy of our time? You made such a big deal over something as frivolous as fast food; I’m shocked that you even care about some [thing] that happened so long ago.”

“Our PD Honor Guard has always participated in the city’s 9/11 Memorial event. Our agency released the media release and incident report regarding Arby’s last Wednesday. We have not given any further statements to the news media. Other agencies or certain news stations may choose to still speak on the issue, but the PPPD considers the matter closed.”

McCutcheon said his grandson is eager to return to work, but he does not want him to go back. He’s concerned about his safety. He said Davenport would like to enroll at Broward College in the spring, but finances are an issue. Neither can afford the expense, he said.

The grandfather hopes the teen will do as he did and enroll in the military. For now, though, McCutcheon said he’s defending his family. “Kenny is happy go lucky. This was his first job. He wanted to work. He wasn’t getting into criminal mischief. I don’t want this to be held against him.”

“Teachers should seek to build trust with the parents and seek to know the parents on a first name basis, so they can stay in the loop. I think that will go a long way and would open the door to discuss more personal things that may be affecting the child,” said Forward Times intern Treyvon Waddy […]

Politicians and Their Bedfellows

All too often, politicians forget about the communities which they serve and get caught up in THE GAME.  This is especially easy to do when political bedfellows are creeping nearby.  In some cases, the bedfellows are called lobbyists who raise thousands of dollars for campaigns in exchange for voting favors.  In other cases, they are called longtime friends who see themselves as the puppet masters – lurking behind the scenes and pulling all the strings.  In the Black community, these bedfellows rarely live in the communities that are being raped of vital services, projects and programs.  […]

Cleveland’s RNC was the whitest convention I’ve ever attended

Cleveland’s RNC was the whitest convention I’ve ever attended