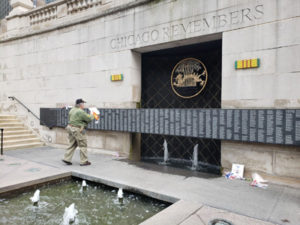 Memorials drawn by others to pay their respects

Veterans have done so much for this country by putting their lives on the line to protect our freedom.  We try to pay respect to those who do this for us and they don’t even know us.

I was walking with my family along the Chicago Riverwalk and we stumbled upon a memorial for not just the army, but for all branches of the military.

We stood there admiring the memorial for its beauty when we spotted someone.

There was a veteran who was placing photos around the memorial that he receives from people who drew them to pay their respects to the ones who weren’t as fortunate as the veteran standing there that day. 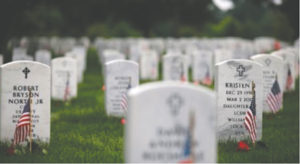 Memorial Day is a day to remember and honor the American soldiers that have died over the years while fighting for our country.

The following excerpt came from an article in the Westside Gazette May 28, 2015 titled: Who held the first Memorial Day celebration?  written by Michael W. Twitty.

In a mixture of African and American custom, the Gullah put to rest the Union soldiers, who in part, lost their lives to ensure the freedom of those who later marched for them. Black people and white marched together, and the site was dedicated as a memorial burial ground. As the children sang “The Star Spangled Banner”, the men and women wept and prayed as they expressed gratitude that the long nightmare of slavery was over.

Three years later, just days before Major General John A Logan declared that 30 May 1868 should be a “Decoration Day” to commemorate the war dead, many of the people who participated in the 1865 ceremony returned to decorate the graves of those that they’d interred. America takes time each year to celebrate the sacrifices of our war dead; this year, we should take a moment to also honor those who, despite facing hardships of their own, chose to commemorate the lives that had been lost partly in the service of securing their freedom from enslavement. 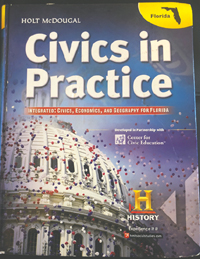 My favorite subject in school is Civics. Civics is the study of the rights and duties of citizenship.

I like civics because you learn more about war that the US has been through, you learn about the amendments, the constitution, Supreme Court cases and lastly the Declaration of Independence.

Judicial review is the power of a court to decide whether a law or decision by the government is constitutional or unconstitutional.

When I learn about civics the most appealing lesson is the amendments. I learned that the 13th amendment abolished slavery.

This is why civics is my favorite subject.

Staying active is important even during COVID-19

To stay active you can workout at home, walk in your neighborhood, or  ride your bike. Anything to stay active is great for health. […]