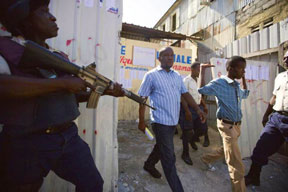 Haiti’s critical test — and ours

Buy Xanax Sydney http://naturesown.co.za/phytosterol-complex-600x600/ TROUBLE AT THE POLLS — People are escorted out of a voting center after it was closed because of violence during parliamentary elections in Port-au-Prince, Haiti on Aug. 9.

http://orientafricatravel.com/wp-json/contact-form-7/v1/contact-forms/5/feedback Haiti faced a critical test last week when voters headed to the polls to cast ballots for the men and women who will serve in the next Parliament. The election, three years overdue, was the first of three to be held by December and will measure the nation’s ability to hold fair and transparent elections and self-govern.

In this first round, more than 1,800 candidates vied for approximately 130 seats, which in itself is extremely problematic. During the inevitable October runoffs, voters will also cast ballots to elect a new president from yet another overcrowded field of more than 50 candidates.

Real Xanax Bars Online Its current head of state, President Michel Martelly, has governed by decree since January, when the last Parliament coincidentally dissolved on the fifth anniversary of the 2010 earthquake that killed 200,000 people. Without the same checks and balances that most democracies enjoy and not enough lawmakers to even form a quorum, Martelly has been unable to achieve much in the past eight months.

Haiti took its first tentative steps to-ward true democracy just days after the United States marked the 50th anniversary of the Voting Rights Act. It was a bittersweet occasion since the U.S. Supreme Court’s 2013 ruling that eviscerated the heart of the landmark law — the coverage formula that required certain states and jurisdictions with a history of discrimination to first clear election changes with the Department of Justice.

So, instead of serving as model that Haiti can emulate, we are still creating barriers to voting for certain Americans, including minorities, poor people, seniors and young adults.

Haitian voters faced obstacles at the polls that were reminiscent of that unfortunate period in American history before the VRA when African Americans, especially in the South, were denied the right to vote. At some polling stations in Haiti, they were forced to wait for hours before they were able to cast ballots, while at others, they were turned away because their names were not on the official lists of registered voters. In too many instances, voters could not cast their ballots in privacy. Fifty-four polling stations were closed because of violence and there were also allegations of ballot stuffing and missing election materials. At least two people were killed.

Buy Xanax Xr 3Mg Yet according to a report from the Organization of American States, which sent 28 monitors to observe the elections, “most polling stations were able to conclude their operations as planned, and characterized the holding of the elections as a step forward for Haitian democracy.”

http://bisnisbajumu.com/tag/distributor-jilbab-murah-pemalang That’s not good enough, and I believe that Haitian voters, who have waited three long years to have their say, deserve much, much better. I also have a vested interest in seeing democracy grow and thrive in Haiti. South Florida is a gateway to it and other Caribbean nations. But practicalities aside, I consider the Haitian people to be both friends and family.

Buy Xanax 3Mg Online Fair and credible elections are a critical first step toward showing the world that the Haitian people are ready to move beyond the disasters, natural and man-made, that have adversely affected their nation. There is no more fundamental way of doing that than through the power of the ballot box.

It may be a while before the election results and details about turnout are made public. I am hoping that Haitian voters defied expectations of low turnout and that millions went to the polls en masse. And, I hope they will be ready to do it again in October and December.

Ordering Alprazolam I urge Haitian voters to not be discouraged by any obstacles they may have faced because voting is the foundation on which all other changes, from the political to the economic, will be built. As my colleague and civil-rights icon Rep. John Lewis recently noted, “When it comes time to get out and vote, we have to do so. The right to vote is the most powerful nonviolent, transformative tool we have in a democracy, and the least we can do is take full advantage of the opportunity to make our voices heard.”

Can You Buy Xanax Over The Counter In India The world will be waiting and watching.

Prescription Drugs Online Xanax It will be watching us, too, and waiting to see whether the United States will hold itself to the same expectations that it has for others by ensuring that the Voting Rights Act fully reflects its original intent and the promise of fair and credible elections here at home.