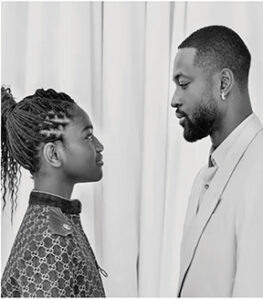 Retired NBA superstar, Dwayne Wade, will go to battle for his children.

And he’s preparing for a HUGE fight.

Wade recently filed a petition to legally change his daughter’s name from “Zion” to “Zaya,” requesting to refer to her as “female” in all future documents. Zaya came out as transgender in 2020, sharing she was “ready to live [her] truth.”

Zaya’s truth is beautiful because it’s SO Black!

Pre-colonization, African countries didn’t persecute people for sexuality or gender, unlike anti-LGBTQIA+ violence and murder seen throughout Africa today. Black liberation is tied to Black-LGBTQIA+ identity — “othering” our own people is white supremacy at work.

Like Zaya, we must live unapologetically. Like Wade, we must support community members with different identities from us, understanding these differences don’t make them less Black.