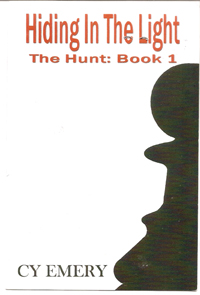 Hiding in the Light is a young adult, action-adventure, coming of age story about the effects of bullying and the measures one rakes to be accepted. Set in the South in the late 1960’s, it’s the journey of Joseph Graham’s efforts to find himself and accept himself while facing the injustices of adversaries. They mock his differences: His looks, his speech, and his thoughts are different from the other boys. This brings unwanted attention from the neighborhood bullies.

The bullies and the affluent within his community all draw lines in the sand, and Joseph is pushed to the middle. He searches for a way to escape his life o flack. But poverty, anger, and abuse offer no open doors. So., he struggles to stand and fight the slings and arrows of his haters until his moral compass is shattered.

Joseph becomes a pawn in the street game of thuggery. Trying hard to prove himself and fit in, he takes on the persona of his alter ego. Through this fictional character, he’s able to hide his sorrows in the light. He pretends the hurt doesn’t hurt until he loses himself within his alter ego and spirals out of control, landing at death’s door. All while the bullies continue to sucker punch him with their verbal beat-downs. For a sample reading of the book visit
http://hidinginthelightthehunt.com