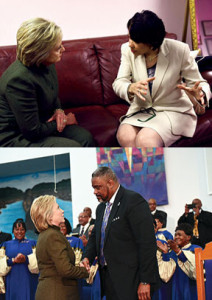 Lends her voice, support for federal plan to aid city

Democratic presidential candidate Hillary Clinton took a pause from campaigning on Feb. 7 to visit Flint, Mich. at the invitation of the city’s mayor, Karen Weaver, following weeks of conversations between the two leaders about the health crisis that citizens, particularly children, continue to face after several years of drinking and bathing in tainted water.

While on the campaign trail and even during interviews and private speaking engagements, Clinton has referred frequently to the challenges facing the residents of the lead-poisoned city – a once bustling factory town long in decline that in addition to widespread poverty and unprecedented unemployment now faces a state-declared man-made emergency because of undrinkable tap water.

Former Secretary of State and First Lady Clinton, scheduled to tour the city with Mayor Weaver, spoke to Flint residents at the House of Prayer Missionary Baptist Church, and then traversed the city listening to personal testimonies, re-quests and complaints in order to learn more about the state of the crisis.

Weaver, during an MSNBC televised interview on Sunday, said Clinton has promised to help in every way possible including adding pressure on Congress to approve a bill that would allow for federal funding to help the city deal with its water crisis.

“We’ve been waiting for the state [of Michigan] for almost two years to come in here and fix this problem,” Weaver said. “We can’t wait any longer.”

Clinton spoke with the NNPA

News Wire from Flint by tele-phone following her tour and a host of meetings with clergy, elected officials, the mayor and residents of the city.

“I was honored to be asked to come to Flint by the city’s mayor as she continues her valiant effort to draw national attention to the tragedy here,” Clinton said. “This is not merely unacceptable and wrong, but also immoral. The children of Flint are just as precious as children in any other place and they’re deserving of health care and a quality education.

We still don’t know how many will be effected or the challenges that they will face in the future. But we do know that action is needed immediately. During my visit here, I had the opportunity to address a large congregation at the House of Prayer where their pastor and others remain committed to bringing about positive change.”

Clinton continued: “I hear that both senators from Michigan are proposing a $200 mil-lion bill and Congress should pass that bill. Then we need to figure out how to initiate more medical testing and also institute educational support so that everyone, especially the children here, are better equipped to cope with the long term effects of lead poisoning. The state of Michigan also needs to step up to the plate.”

Clinton added that it’s vital that a bright line be shined on Flint.

“What happened here was so egregious – officials knew what was going on and they ignored it, they remained in-different to it – this particular crisis deserves as much attention as possible. First things first – everyone deserves clean air and clean water,” she said as she prepared to return to New Hampshire in order to campaign for the final days before the state holds its presidential primary elections.

Weaver has recently begun promoting a private-public partnership that would fund a complete pipe system replacement, but she also remains highly critical of state officials, particularly Governor Rick Snyder, who she says knew about the foul, lead-poisoned water but chose to look the other way be-cause of the costs related to overhauling the pipe system.

Clinton campaign chairman, John Podesta, in an earlier statement, said, “We should use the spotlight of the presidential campaign to keep the focus on Flint and to lift up the historic underlying issues that Flint and too many other predominantly low-income communities of color across American are struggling with each day.”

During the latest Democratic presidential debate, held last week and aired by MSNBC, Rachel Maddow, who served as a co-moderator, asked Clinton if she would launch a federal response. Clinton said she would “absolutely” while also seeking remedies to the myriad of burdens now faced by Flint residents.

“That includes fixing their pipes, it includes guaranteeing whatever health care and educational embellishments they may need going forward and I think the federal government has ways where it can bill the state of Michigan,” Clinton told Maddow. “If Michigan won’t do it, there have to be ways that we can begin to move, and then make them pay for it and hold them accountable.”