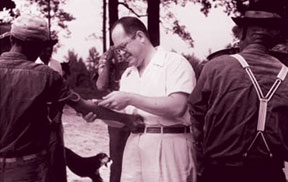 How the government infected Black families with syphilis

By Your Black World

Many people have the impression that racism simply involves isolated acts of prejudice. However, the racism that results in long lasting oppression of people from minority backgrounds is typically perpetuated by institutions. People of color have faced institutional racism in housing, education and law, to name a few. Some of the most unsettling examples of institutional racism have involved medicine. In the 20th century, the U.S. government conducted syphilis research on marginalized groups—poor Black men in the American South and vulnerable Guatemalan citizens—with disastrous results.

In 1932 the United States Public Health Service partnered with educational establishment the Tuskegee Institute to study black men with syphilis in Macon County, Ga. Most of the men were poor sharecroppers. By the time the study ended 40 years later, a total of 600 black men had enrolled in the experiment called the “Tuskegee Study of Untreated Syphilis in the Negro Male.” Medical researchers swayed the men to participate in the study by enticing them with “medical exams, rides to and from the clinics, meals on examination days, free treatment for minor ailments and guarantees that provisions would be made after their deaths in terms of burial stipends paid to their survivors,” according to Tuskegee University. There was just one problem: Even when penicillin became the main treatment for syphilis in 1947, researchers neglected to use the medication on the men in the Tuskegee study. In the end, dozens of study participants died and infected their spouses, sexual partners and children with syphilis as well.

The Assistant Secretary for Health and Scientific Affairs created a panel to review the study and in 1972 determined that it was “ethically unjustified” and that researchers failed to provide participants with “informed consent,” namely that test subjects were to remain untreated for syphilis. In 1973, a class action suit was filed on behalf of the enrollees in the study that resulted in them winning a $9 million settlement. Moreover, the U.S. government agreed to give free medical services to the survivors of the study and their families.

Via Medical Racism: The Tuskegee and Guatemala Syphilis Studies.