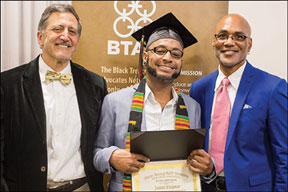 I Made‘ a Vow’: Ending HIV/AIDS Stigma through BTAN Cincinnati

The Black Treatment Advocates Network (BTAN) is trans-forming lives across the country, linking Black Americans with HIV/AIDS to care, raising HIV science and treatment literacy in Black communities, and advocating for policy change that will help curb the epidemic. Jaasiel Chapman, a community-outreach coordinator for IV-CHARIS, an AIDS service organization, is starting the BTAN chapter in Cincinnati. Chapman shares how creating partnerships can help expand BTAN’s footprint.

Growing up, I had a couple friends that ended up contracting HIV. After seeing the stigma and the hurt that they went through, I made a vow that if I ever got the opportunity to lobby on behalf of individuals that are affected by HIV and AIDS, I would do so. I have made that part of my lifelong mission: to not only lobby for those, but to do my part in erasing the stigma against those living with HIV and AIDS and those within the gay community—more specifically, the gay Black community.

Starting a BTAN chapter here is important because IV-CHARIS, the organization that I’m with, is the only minority-run organization that deals with HIV and AIDS within the local Black community. African Americans are the most at risk and have the highest rates of HIV infection. Not only am I Black, but I am the face of what the epidemic looks like.

We have a lot of young people contracting HIV in our city, and we are in the midst of a crippling heroin epidemic. Our medical director at IV-CHARIS believes that if we don’t get a handle on that, HIV transmission will rise.

It’s important for us to get together and mobilize the community and confront this epidemic head on. I would like to see more young Black men involved in the fight. I think that if Black men were more vocal and more visible, we could really see HIV halted in its tracks.

We just had a PrEP [pre-exposure prophylaxis] summit on April 30. The health commissioner had come to me one day to talk about PrEP, and it just so happened that IV-CHARIS was in the beginning stages of starting the PrEP summit. Under the leadership of the executive director, Mamie Harris, our organization has a great reputation in the city. Because of that relationship, the Health Department of Cincinnati and then the AIDS Educational Center here partnered with us.

Because of the Health Department, we were able to utilize the convention center here for free to put on the summit. We definitely have plans to work together in the future to promote PrEP in the community.

I’ve built some relationships with organizations in Columbus. I’ve done some panel discussions in Dayton, Ohio. The partnerships are growing. I got connected with somebody from the University of Louisville, where they’re planning a PrEP summit in November. A lot of partnerships are allowing me the opportunity to promote PrEP and get this message to the community in the best way possible.

As told to Tamara E. Holmes, a Washington, D.C.-based journalist who writes about health, wealth and personal growth.