“Why is your child so weird? She can’t speak? How is she going to survive?” hearing such comments became a usual thing for Madan Rai and Rachana Rai when their daughter was a mere two-year-old.

Soon, she was detected with Autism Spectrum Disorder (ASD). The developmental and neurological disorder, which weakens a person’s ability to learn and interact with others and in some cases makes people indulge in repetitive behavior, begins early in childhood.

“I and my wife didn’t know what ASD was. On her second birthday, we invited a lot of kids. All of them were playing together but Jiya wasn’t a part of them. After this, we finally decided to consult a doctor, and that is how we got to know,” Madan Rai, a naval sailor who is currently based in Mumbai, a city on India’s west coast, told Zenger News.

Ten years later, Jiya swam from the Bandra-Worli Sea Link in Mumbai to the Gateway of India — covering a distance of 36 kilometers (22.4 miles) in open water in 8 hours 40 minutes — to spread awareness about the disorder that affected her. 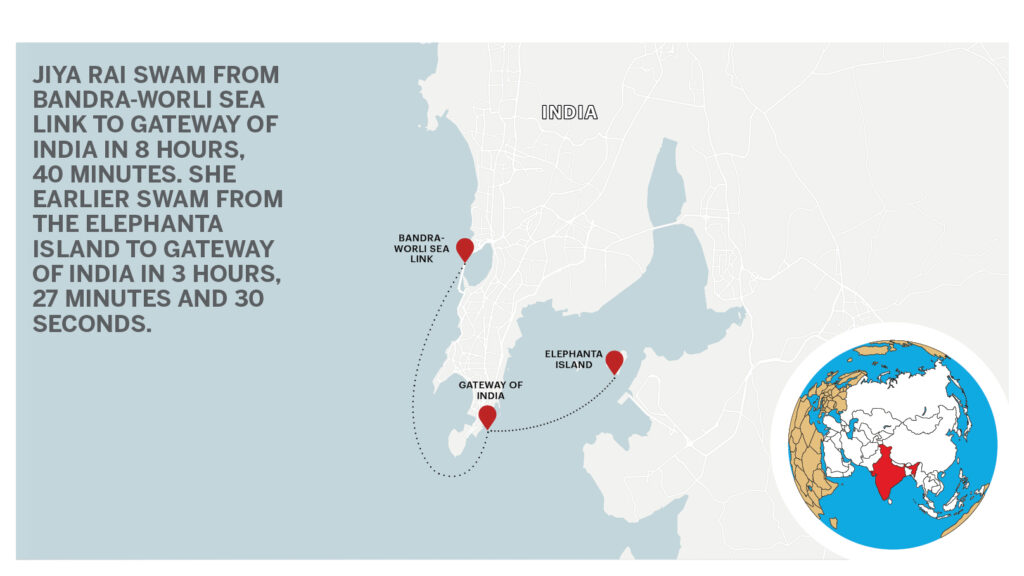 She has set the record of becoming the youngest and fastest girl with ASD in the world to cover this distance by swimming in open water, thus qualifying for Guinness World Records, according to her father.

Jiya also swam from the Elephanta Island to the Gateway of India — covering a distance of 14 kilometers (8.7 miles) in open water in 3 hours, 27 minutes and 30 seconds — on Feb. 15, 2020. “This feat got her name into the India Book of Records, and Asia Book of Records,” the father said.

“Last year she became the youngest girl with ASD to cover 14 kilometers in record time. That is when the Swimming Association of Maharashtra [a recognized body of the Swimming Federation of India] asked me to make Jiya try swimming from the Bandra-Worli Sea Link to the Gateway of India. I was not sure if she could do it, as she is too young. But she practiced relentlessly throughout the lockdown and made us all proud. Guinness World Records will have her name soon,” he said.

“Before the event, the Swimming Association of Maharashtra and I did our homework. We checked the Guinness World Records website where the maximum distance covered by a para swimmer was 11 kilometers [6.8 miles] in 4 hours, 8 minutes. This is what made all of us hope that if Jiya completes the new challenge, she will become eligible for Guinness World Records,” said the father.

Jiya’s swimming journey started when she was three-years-old.

“She tried to mingle with other kids, but many parents did not let her,” Madan Rai said.

With every passing day, Jiya’s energy level kept increasing and there were other behavioral changes like getting irritated easily, which worried her parents.

Though ASD works as a barrier to the growth of an individual, Jiya and her father took it as a challenge and didn’t let it hamper her from achieving her goals.

“I realized she loved being in the water when I took her to a nearby swimming pool once. I started getting into the water to train her. Within two years, by 2011, she got extremely comfortable with water,” said Madan Rai.

“By the time she was four, she had learned all the four strokes — breaststroke, freestyle, sidestroke, and front crawl — and could easily cover 50 meters by swimming.”

Swimming became Jiya’s favorite thing to do. With time, the hours she used to spend in the swimming pool kept increasing, which got her recognition. “She started winning medals in district and state-level swimming championships,” the father said.

“Children with ASD will have a certain degree of excellence. There will be a specific field of excellence where they will be way ahead of their peers,” said Aditi Mehra, a psychologist at Ashoka University in Sonipat near Delhi who was formerly with hospital chain Fortis Healthcare’s psychology department.

On Feb. 17, Jiya commenced swimming in the Arabian Sea early morning and reached the Gateway of India at 12.30 pm (IST). The event, conducted by the Swimming Association of Maharashtra, was associated with the FIT India Movement by India’s Ministry of Youth and Sports Affairs.

“The federation supports such children, and we provide all the support so that they can achieve big,” Kishore Shetty, the Committee Chair of the Swimming Federation of India, told Zenger News.

“We come in contact with special children who excel in sports through their coaches. We got to know about Jiya after she participated in some of the events we organized,” Shetty said.

Jiya, who is still struggling with speech, was awarded a memento and a trophy by the federation.

A World Health Organization report from 2019 states that worldwide one in 160 children are detected with ASD every year. “Based on epidemiological studies conducted over the past 50 years, the prevalence of ASD appears to be increasing globally,” the report states.

Another report from 2019 published in Neurology India states that there is a lack of systematic reviews focused exclusively on the prevalence of ASD in India.

“It has been estimated that more than 2 million people might be affected with ASD in India. Most of the reported studies on ASD are based upon hospital-based data and thus lack information on the prevalence estimates of this disorder in India,” the report states.

“My family has been criticized to the extent I can’t explain. The harsh comments gave us sleepless nights. My daughter has achieved so much with this disability that we want to let society know if there’s a will, there is a way, and autistic children are not mad. They deserve equal love and respect like anyone else,” Madan Rai said, remembering early days.

“We don’t want any other child or their families to go through what we have, so we are trying to spread the message that ASD doesn’t make a person weak.”