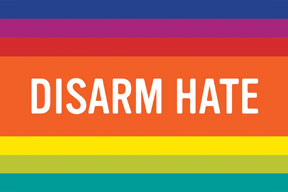 It has been a year since a young White man presented himself at the historic Emanuel African Methodist Episcopal Church in Charleston, South Carolina and was lovingly welcomed to join an evening bible study session in progress.

The session came to a violent and deadly end however, when the young man revealed himself to be filled with hate—not love, for those who welcomed him that evening. The shooter sat among the prayerful for nearly an hour before he pulled out a Glock 41, .45-caliber handgun and began shooting. It was an act of unmitigated and unconscionable violence.

According to one eye witness, the killer who stopped and reloaded his weapon five times said, “I have to do it. You rape our women and you’re taking over our country and you have to go.” When he finished shooting, nine people lay dead and one injured. The murderer later confessed to what he had done and said he did so hoping to start a race war.

“There is no greater coward than a criminal who enters a house of God and slaughters innocent people engaged in the study of scripture,” said Cornell William Brooks, President and CEO of the NAACP in the wake of the shooting.

On Sunday, the nation was once again brought to its knees in horror and disbelief when the largest mass shooting in American history and simultaneously one of the most egregious hate crimes was perpetrated against the LGBT community. This time a gunman opened fire with a military style, high-capacity weapon in a crowded nightclub in Orlando, Florida frequented by members of the LGBT community. He killed 49 people and injured 53 others before being shot dead by police.

On Thursday, following a 15-hour filibuster in the U.S. Senate lead by the Democratic Party designed to shame Republican leadership into allowing a vote on gun legislation to ban gun sales to people on the terror watch list and to require background checks on gun sales at gun shows and on the internet, the daughter of Charleston massacre victim, Ethel Lee Lance, addressed the public with passion and eloquence.

Reverend Sharon Risher reflected on the life of her mother. “My momma’s life was an expression of her faith, her strength and resiliency,” she said. “Coming from a humble means, my momma always wanted more. The circumstances were hard, yet she found a way to keep on dreaming.”

Risher said it was hard to believe it has been a year since she learned that not only her mother but two of her cousins were among the nine killed at the Mother Emanuel Church on June 17, 2015. “The pain of knowing my mother and cousins were killed in a racially motivated hate crime carried out against Black church goers peacefully praying, is some-thing I carry with me every day,” she lamented.

Risher explained how she has spent most of her professional life working as an emergency room trauma chaplain; but, no amount of training could have prepared her for the shock, pain and emptiness that consumed her in the days after the death of her family members. “I struggled to answer why,” she stated; and, went on to question how the shooter was able to get his hands on a gun; and how we live in a country filled with so much hatred.

“I do know that the unspeakable grief that accompanies the death of a loved one killed by gun violence, is something that stays in your heart.”

“Racism, sexism, misogyny, nationalism, homophobia and religious intolerance are all things that we have sadly experienced over and over in this country,” Risher reminded her listeners. “But, hate becomes deadly when we make it far too easy for those intent on causing harm to get their hands on a gun, that is why I am here today.” she stated adamantly. “To disarm hate.”

According to Risher, after the shooting that took her mother’s life she joined the Every Town Survivor Network, joining her voice with others who had experienced the same incomprehensible grief. “I needed to be a part of the solution to find a way to keep on dreaming like my mother did,” she said. “I needed to channel my pain into action.”

Risher said when she learned about the Orlando shooting on Sunday she was overcome with sadness and anger. “I was full of heartbreak for the victims and their families whose lives are forever changed physically and emotionally by the sheer horror of that day.”

Risher claimed she is still learning how to walk-the-walk of action and advocacy. “I must profess I don’t know all of our nation’s gun laws point by point; but, I do know that the unspeakable grief that accompanies the death of a loved one killed by gun violence, is something that stays in your heart.” She continued, “I know that there is more that we all can do, we must do to prevent the next tragedy; and I know that America is with us.”

Near the end of her presentation Risher made an emotional and dramatic request. “I plead with you. I plead with you with everything I have in my heart. I ask everyone to join me in this walk to disarm hate.”  She encouraged everyone to text the phrase, ‘Disarm hate’ to 64433.

Risher ended her remarks with an expression of optimism, hope and determination that together, the American people can build a safe future and spare other communities from experiencing tragedies by some-one who should have never had access to a gun.

These sessions will occur between August and December 2016 and will host up to 50 participants.

To expand opportunity for Black entrepreneurs and advance Miami as a diverse and inclusive innovation hub, the John S. and James L. Knight Foundation recently announced $1.2 million in new support for Code Fever’s Black Tech Week and related programs throughout the year. […]