How To Purchase Alprazolam Online http://artists-atelier.com/leonardo-da-vinci-rocky-landscape-studies-in-pen-ink 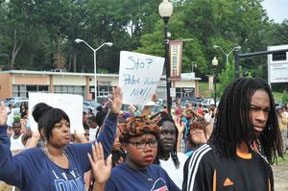 http://richlistgroup.com/wp-cron.php?doing_wp_cron=1580913891.2560050487518310546875 Buy Xanax Au       ST. LOUIS, MO. — Jesse Jackson told The American he hopes that the U.S. Department of Justice sees the Ferguson Police shooting of Michael Brown on Saturday and resulting community violence as “systematic of a national crisis.”

http://boldmarketing.com/listing/james-j-hill-house/ The injustice, he said, was two-fold: a police shooting of an unarmed Black teen followed by Black youth from high-unemployment neighborhoods erupting in rage.

“Black men should not be the objects of target practice,” Jackson said of the shooting. “It’s not a unique situation. It’s a prototypical American situation. Police departments do not reflect the population. It’s awful, but it’s not unique.”

Buy Xanax Vietnam The resulting community violence on Sunday, following a non-violent candlelight vigil to commemorate Brown, should be seen in the context of a chronic urban crisis, he said.

“Poverty is a weapon of mass destruction,” Jackson said. “Poverty is in the community, guns are in, drugs are in, jobs are out. Banks are bailed out without meaningful community reinvestment. Too many people have no stake in the culture.”

Buy Xanax From Canada Online Jackson said that chronic urban problems remain to be ad-dressed after the shooting of Michael Brown and the community’s outrage are resolved.

9b1e89db824edb4edbba457412a0b512 “These kids need educations, skills, job training, jobs, scholarships to college,” Jackson said. “We need a national forum on urban policy, justice and repression. This is a national crisis that has manifested in Ferguson.”

Asked for advice to organizers on the ground, Jackson said, “That’s tough. I saw a sign that said we need quietness. Quietness is not the answer. Quietness is the absence of noise. We need the presence of justice.”