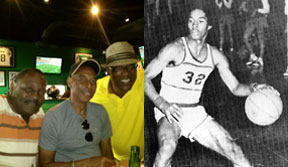 John Howard has made his final layup

Howard, was a first-team all-county selection his senior season (1972) at Stranahan.

Simply ask anyone who ever watched John Howard play basketball if he was born to play the game?

“He was one of the greatest point guards to ever play in Broward County,” said H.L. Coleman Sr., a former teammate and long-time friend of Howard. “He didn’t get the re-cognition that some of the guys got (after him).

“But if you really knew the game, you’d know that John was as good as any of the great point guards that came through Broward County. There have been some good guards that’s come through Broward County. They may have been flashier than John, because he wasn’t flashy. But he got the job done. He was a good free throw shooter, good passer, good ball-handler and he could score. John was a coach on the floor. He was what a point guard is supposed to be. He made everyone around him better.”

Howard, was a first-team, all-county selection his senior season (1972) at Stranahan. He played for Broward Community College North campus before transferring to Western Carolina University. While at Western Carolina, Howard played with another Broward County prep legend in Kirby Thurston. The six-feet-nine inches Thurston starred at Blanche Ely and Pompano Beach High Schools. Howard was retired from the United State Postal Service.

STUDENT OF THE GAME

Several of Howard’s former teammates recalled how effective he was at point guard, even without a flamboyant style.

“He wasn’t a flashy type of player, but he got the job done,” said Carl Roberson, a former Stranahan teammate.  “John was a real trooper.

“He made me a student of the game. It was amazing how much he understood the game. I really learned to appreciate someone like John Howard be-cause he made it easier for me. He paved the way. In my opinion, he was one of the best point guards to ever play in Broward County. When the ball was in John’s hands, you always knew something good was going to happen.”

You’ll get no argument from former Dillard High standout Sam Singletary about Howard’s ability. Singletary was also a first-team, all-county selection in 1972. Singletary had the unique experience, like Thurston, of playing against Howard and later with him. Singletary and Howard played together at BCC North. After JUCO, Singletary transferred to Morehouse.

“There was no question in my mind that John Howard was the No. 1 point guard in Broward County in my senior year (1972),” Singletary declared. “Everybody has flaws in their game, John included.

“But everybody probably couldn’t pick the same flaw when it came to John. He brought so much to the table that you couldn’t say . . . he can’t go left or he can’t shoot. He was so well versed in all his skills.

John made it so easy for me. He got me easy shots . . . easy passes going to the basket. I think everybody would admit that he made the game easier for everybody, because he didn’t mind carrying the load.”

Singletary called it the best of both worlds. Gavin, is considered by many the slickest ball-handler in the county’s his-tory.  Singletary vividly recalled the first matchup between Gavin and Howard during the 1971 season.

“He (Howard) held his own against Gavin,” Singletary said. “He was shadowing Gavin like a suit. I said to myself . . . John is good. He had a way of breaking his man down and taking that corner.

“I’ve seen John in practice go behind his back and do a few things (like Gavin). He de-finitely had a little flare. But more important, he was a coach on the court. Yes, John was capable of doing a lot of flashy things, but he was an extension of whatever coach he played for.”

Howard’s leadership on the court is what separated him from other point guards throughout the years, according to Cole-man. Howard was known for his quick thinking and ability to keep his teammates under control. He always led by example.

“He studied the game,” said Coleman, whose friendship with Coleman spanned 50 years. “He knew the game and he studied his opponents.

“He would always make sure that everybody was in the right place. One thing about John, he always knew what you were good at . . . as far as when to get you the ball and what part of the court to get you the ball. He was very good at doing things like that. He was a true floor general, which is what you want a point guard to be. Another thing about John is he was an A-1 student in the class-room.”

Like friendships between Howard and Coleman and Roberson and Singletary, it seems those rivalries among those area schools are also time-less.

The flames are still burning.

There was quite a difference of opinion when it came to how Dillard continued its dominance of Stranahan during the 1971 season. During the district tournament, Dillard was a heavy favorite to defeat the Dragons again like during the regular season. The tournament was played at Pompano Beach High gym.

“That was the night our bus broke down and we had to ride in the police paddy wagon to the game,” Coleman recalled. “We weren’t even supposed to be in the game with Dillard.

“They were supposed to blow us out. But it was a tight game till John Howard fouled out and everything went to pieces.”

Singletary took the Fifth (amendment) and refused to comment on how Dillard won.

“I remember that game,” Singletary chuckled. “I’m not going to say it was the best one I’ve seen but it was a good game  .. we won.”

Although athletes aren’t allowed to criticize the officiating, Roberson believes it’s safe to comment about the game . . . some 45 years later.

“We had them (Dillard) on the ropes,” Roberson said with a smile. “But he (John) got fouled and the referee didn’t call it and John was bleeding all down his arm from the foul.

“So John was telling the referee that I’m bleeding and I didn’t do this to myself. That changed everything.”