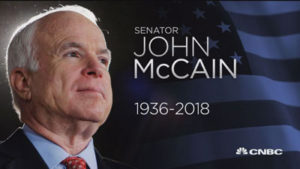 John S. McCain, a Naval aviator, prisoner of war in Vietnam, a Republican congressman and senator from Arizona, and a two-time contender for the presidency, died on Saturday. He was 81.

Mr. McCain was the embodiment of courage: a war hero who came home on crutches, broken body, permanently disabled, but not in spirit.

He served two terms in the House of Representatives and six in the Senate. He was a maverick who defied his party’s leaders. He compromised with Democrats.

Senator McCain was diagnosed with and operated on for brain cancer. Shortly after, he returned to the Senate and voted against a GOP repeal of ObamaCare with an iconic thumbs-down gesture.

“What greater cause could we hope to serve than helping keep America the strong, aspiring, inspirational beacon of liberty and defender of the dignity of all human beings and their right to freedom and equal justice? That is the cause that binds us and is so much more powerful and worthy than the small differences that divide us,” he said to his Senate colleagues.

John McCain was sincere and principled.  These were his essential qualities. His character reflected the character of our nation.

In a speech at the National Constitutional Center last year, he said, “We live in a land made of ideals, not blood and soil. We are the custodians of those ideals at home, and their champion abroad. We have a moral obligation to continue in our just cause, and we would bring more than shame on ourselves if we don’t. We will not thrive in a world where our leadership and ideals are absent. We wouldn’t deserve to.”

John McCain’s character and service to America defined his life and legacy.

Call to Arms for John McCain

The N.Y. Times reported “the White House declined on Friday to renounce or apologize for an aide whose joke at a meeting that Senator John McCain was irrelevant because he would soon die.” […]