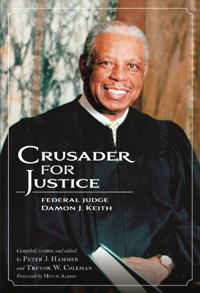 WASHINGTON – United States Court of Appeals Judge Damon J. Keith, who decided many of the nation’s most important school desegregation, employment discrimination, and government surveillance cases, passed away this morning at the age of 96. Before her passing in 2007, Judge Keith was married for 53 years to Dr. Rachel Boone Keith. The couple raised three daughters together: Cecile, Debbie, and Gilda.

Judge Keith was the recipient of more than 40 honorary degrees, the NAACP’s Spingarn Medal and many other awards. He also served as national chairman of the Commission on the Bicentennial of the U.S. Constitution. The Washington Post’s slogan “Democracy dies in darkness” was inspired by language in one of Judge Keith’s opinions—” Democracies die behind closed doors. “Spencer Overton, the President of the Joint Center for Political and Economic Studies and a former clerk of Judge Keith, released the following statement:”

“I am incredibly sad to hear about the loss of Judge Damon J. Keith, and my thoughts and prayers go out to Cecile, Debbie, Gilda, and the rest of his family. Most know of Judge Keith as a national leader in civil rights who also loved Detroit deeply and connected people across racial and economic lines. I am a direct beneficiary of another legacy of Judge Keith—his commitment to the future in identifying and developing young talent. As clerks to Judge Keith, we were shaped by his devotion to both excellence and principle. We learned about navigating relationships, treating all people with respect, and exercising courage when faced with difficult decisions. Judge Keith was incredibly generous with and supportive of his clerks. While our deep affection for Judge Keith motivated us to work hard for him, he gave us much more than we could ever give him. Our professional successes are directly attributable to the skills, confidence, and values we acquired in Judge Keith’s chambers. We love him so much.”

Spencer clerked for Judge Keith from 1993-1994. In October 2018 he gave the Seventh Biennial Lecture at the Damon J. Keith Center for Civil Rights at Wayne State Law School on “Racial Equality and the Future of Work.”