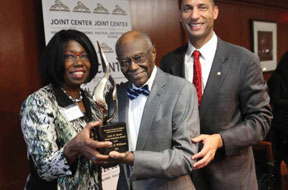 From Center for Political and Economic Studies

Eddie Williams, who served as President of the Joint Center for Political and Economic Studies from 1972-2004, passed on Monday, May 8, 2017 at the age of 84.  ”On behalf of the Joint Center and our community of elected officials and policy experts who serve communities of color, I want to express our sorrow upon learning of the passing of Eddie N. Williams,” said Joint Center President Spencer Overton.

Williams was born August 8, 1932 in Memphis, Tennessee and graduated from the University of Illinois in 1955. After serving in the Army he worked as a reporter, as the first Black protocol officer at the State Department, and on the staffs of Senator Edward M. Kennedy (D-Mass.) and Sen. Hubert Humphrey (D-Minn.). In 1968 he joined the University of Chicago as director of the Center for Policy Study, and a few months later he became vice president for public affairs.

In 1972, Williams was recruited to lead the Joint Center. The organization had been founded just two years earlier to support the hundreds of new Black elected officials who came into office in the aftermath of the Voting Rights Act of 1965.

“Eddie Williams built an institution that helped a generation of Black leaders move from activism into governance, and that informed and inspired a generation of scholars committed to using ideas to change real lives,” said Joint Center Board Chair Barbara Johnson. “We are grateful for Eddie Williams’ vision, leadership, and dedication. He leaves an amazing legacy as a giant who blazed new trails when it came to empowering Black elected officials. As Maya Angelou said, ‘when great souls die . . . we can be. Be and be better. For they existed.’ Indeed a great soul has passed. The Joint Center will continue to honor his legacy through our recommitment to the great work he started.”

“Eddie Williams is synonymous with the Joint Center,” said Joint Center President Spencer Overton. “When the Joint Center was going through tough times in 2014, we were all committed to saving and restoring the institution out of respect for all Eddie accomplished, and the goodwill and reputation the organization continues to enjoy due to his groundbreaking and visionary work. We also rebuilt the institution because we knew that the need within the African American community that Eddie met for over three decades still existed. Not only were we motivated by Eddie’s legacy, but he was a close ally, supporter, and adviser in helping us preserve and restore the Joint Center.

I’m still amazed at all Eddie did, and he continues to be my inspiration. His wife Jearline and his other family members and friends are in our thoughts and prayers.”

Williams is survived by his wife Jearline Williams, his son Larry Williams (Rangena Hotaki), his two grandchildren Samira and Rafiq Williams, and his stepson Terence A. Reddick.