Black Panther debuted Friday, Feb. 16 and was highly anticipated as many of us were fascinated with seeing a mainly Black cast, a rarity in Hollywood, led by Black Director, Ryan Coogler, another rarity in Hollywood. It is no secret that despite widespread racial inequality, America is nonetheless enamored by Black culture. And for that reason, I knew that Black Panther would smash box office records. Families, organizations, schools and churches were buying tickets by the dozens, requesting private screenings and even renting out entire theaters. I think we felt a sense of pride that could only be compared to how we felt when Barack Obama was first elected in 2008. Okay, well maybe I went too far with that analogy, but according to deadline.com, Black Panther “recorded the second best Sunday ever” with “$60.1 Million ranking only behind the all-time record held by Disney/Lucas film’s Star Wars: The Force Awakens with $60.5 Million on Dec. 20, 2015. Black Panther [actually] closed out with a three-day total of $201.8 Million, [making it] the fifth-best domestic opening of all time after 2012’s Avengers with $207.4 Million.”

What does this all mean to us? I got a chance to chat with Black Panther Actress Sydelle Noel for a few minutes to get her perspective on the film and its impact beyond box office figures.

Crystal Chanel (CC):   As a fellow Hallandale High School Charger, I would like to know more about your journey from Hallandale to Hollywood?

Sydelle Noel (SN): I was born and raised on Fletcher Street. [We both laughed.] Thankfully, we moved, but ironically, I was bused back to Hallandale High School as a magnet student. In school, I was popular – voted most athletic – involved in volleyball, basketball, cheerleading and even track. In fact, I attended college on a track & field scholarship before deciding that I had an interest in acting.

CC: Black Panther is not your first rodeo. How did you break into the industry?

SN:  I connected with some key people including Assistant Director Knoko Chapple. I was able to appear in a few music videos and commercials, but interning at a casting agency really prepared me for auditions. Working behind the scenes helped me to understand the mindset of producers. They are usually looking for a specific look when casting. This understanding helped me to not be nervous when auditioning.

CC:  Thankfully, you had the look to land a role in Marvel’s Black Panther. What do you want movie goers to get from this film?

SN: It’s more than just a marvel film. It’s about doing something that has never been done before – It’s an all Black cast – It’s Black action heros – It’s strong Black women. It’s unity.

CC: Speaking of unity – what was it like on set?

SN: It was an unspeakable energy at times. Everyone knew the importance of this film. It was dynamic. Sometimes we would break out into songs and into prayers. You could feel the energy.

CC: So there was energy on set. Did music play a role in this? I know Black folks are typically music lovers.

SN: Funny, you should ask. There was a drummer on set who would play the drums frequently especially during stunt training. The drums set the atmosphere, and brought everyone together.

CC: So, what’s next for you Sydelle? 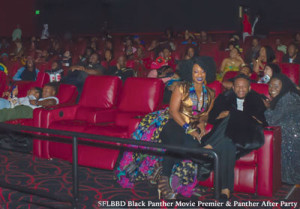 And let’s keep Sydelle’s dreams in our thoughts and prayers as Black Panther brought the nation together. In particular, it brought Black people together. It was a much needed relief from the perils of racism and prolific injustices that our community still faces today. Across the country, we felt a sense of pride. Check out #BlackPantherSoLit and get lost #InWakanda on Twitter.

In the 1950s, Topeka, Kansas, where Linda Brown lived, like a lot of America had dual de facto school systems. One for Black children and one for white children. Black children might be living only a few blocks away from a school but could not attend that school if it was a “white” school.  Instead Black children would be shuttled miles away from their neighborhood school to a “Black” school. […]

Enough with the Racism in the Rooftop Solar Industry

Enough with the Racism in the Rooftop Solar Industry […]