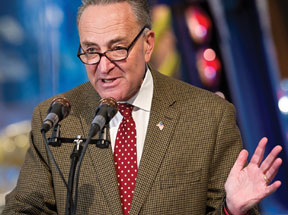 Xanax For Sale Paypal Senator Charles Schumer (D-N.Y.), the new Democratic leader in the Senate, doesn’t have a single Black staffer in a senior-level position. This photo was taken during a ceremony where NASA transferred title and ownership of space shuttle Enterprise to the Intrepid Sea, Air & Space Museum on Sunday, Dec. 11, 2011 at the museum in New York City.                 (Bill Ingalls/NASA/Wikimedia Commons)

42f2dd67ce2749451b282611edcc7312 Don Cravins, the National Urban League’s senior vice president for policy, challenged members of the U.S. Senate, particularly the Senate’s 46 Democrats, on the lack of minority hiring in their senior staff positions at a two-hour forum on Capitol Hill.

“Out of 300 senior-level positions in the Senate, only three are occupied by African Americans. What’s most insulting to me is that only one of them works for a Democrat member — a party that goes out every election and relies on Black voters to elect them,” said Cravins, a former Louisiana state senator; Cravins served as Chief of Staff for former-Senator Mary Landrieu for two years. “I’m not happy, today. I’m frustrated and embarrassed and I’ve had enough.”

Xanax Powder Online About 250 people showed up for the open discussion on congressional hiring, specifically focused on the low numbers of Black and Latino staff in the U.S. Senate.

Green Xanax Bars Online “We are making it abundantly clear, the time is now,” said Don Bell, who added that Senator Schumer, who became the new Democratic Leader in the Senate when Sen. Harry Reid (D-Ariz.) retired, only has Black staff at non-senior staff levels.

Cheap Alprazolam Pills “There are nearly 40 general counsels of color standing at the helm of Fortune 500 companies in America. Forty. And yet you’d be hard pressed to find one Black one in the Hart Senate Office Building,” Cravins told the audience of staff, advocates and press. “It’s an embarrassment. It’s a travesty. Something has got to be done.”

http://tamaralounge.com/?y=Cheap-Xanax-Canada Will Searcy, the director of the Black Talent Initiative at the Joint Center for Political & Economic Studies, said that Senate staff dictates that the Senate’s legislative agenda controls the $3.8 trillion dollar federal budget and provides over-sight over federal employees — collectively 4.1 million people.

Republican Senator Tim Scott’s Chief of Staff Jennifer DeCasper, the only Black Chief of Staff currently serving in the U.S. Senate, participated in the discussion. The only Black Legislative Director in the Senate, Clint Odom, who was recently hired by Sen. Kamala Harris (D-Calif.), was in the audience.

The National Urban League and the Joint Center for Political and Economic Studies have been specific to focus on Black and Latin hiring to senior staff positions in the Senate: Chief of Staff, Legislative Director and Communications Director. The reasons are obvious to Capitol Hill insiders: Senior staffers hire junior staff, control the office budget and handle the most important issues in the office from policy priorities to communications.

Mail Order Xanax Canada “The numbers are worst than they have ever been,” Cravins railed. “We’ve been talking about this issue for decades.”

http://boldmarketing.com/wp-cron.php?doing_wp_cron=1581089908.2639219760894775390625 The issue of Senate staff diversity has been raised several times before in the press and in reports issued by the Congressional Hispanic Staff Association in 2010. Their 2010 report “Unrepresented: A Blue-print for Solving the Diversity Crisis on Capitol Hill,” received media attention, but no measurable hiring changes. The Joint Center’s recent study, “Racial Diversity Among Top Senate Staff,” was released in December.

http://learnwithojo.com/wp-cron.php?doing_wp_cron=1580918386.7190830707550048828125 “I find it ironic that many of these politicians didn’t have a problem outreaching to Black and Latino people during the election, but now they need a director to do it, but okay,” Cravins said when speaking on a recently considered diversity position to deal with the hiring issue.

One reason that there has been no change in the numbers over decades is that members of Congress are exempt from labor laws that would prompt a lawsuit in any other sector. Congress is not required to adhere to the 1964 Civil Rights Act and the Equal Employment Act of 1972. There’s no legal requirement for Senators to answer to anyone on hiring issues and no requirement to post job vacancies in Congress. Since Congress is also exempt from freedom of information requests, there’s also no requirement to report data on hiring.

http://grosirrumahan.com/konveksi-jilbab-serut-pita-dewasa-murah.html Ironically, federal officials that must be confirmed by the U.S. Senate must adhere to such guidelines.

Simeon Booker to Be Memorialized at Washington National Cathedral January 29

A memorial service for trailblazing civil rights journalist Simeon Booker will be held on Monday, January 29, 2018, his wife, Carol McCabe Booker, has announced. The service is scheduled for 10 a.m. at the Washington National Cathedral, 3101 Wisconsin Ave. NW. Booker, a journalistic icon, died Dec. 10 at the age of 99. […]

Xanax 2Mg Buy Online When given the chance at the ballot box, Americans overwhelmingly vote to impose a 36 percent or less rate cap. Today, 16 states and the District of Columbia have these rate caps in place, providing strong protection from payday loan sharks. In remaining states – those without a rate cap – interest rates run as high as 460 percent in California, over 400 percent in Illinois and 662 percent in Texas […]

http://artists-atelier.com/category/blog/trees/ Praise for new rules on Racial Disparities in schools
[…]