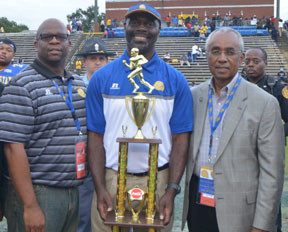 http://tamaralounge.com/?y=Buy-Alprazolam-Online-Uk “We are pleased Coach Land has accepted the position of head coach on a full-time basis,” ASU athletics director Dr. Richard H. Williams said. “He is familiar with our program and has been a part of our many successes. We are confident he will continue to lead the great tradition we have built here at Albany State University.”

Land led the Golden Rams to a 6-4 overall record and the SIAC East Division championship during the 2015 season. His team made an appearance in the SIAC title game where it lost to Miles College.

http://grosirrumahan.com/tag/celana-jogger-murah Land also had seven players who were named to the 2015 SIAC All-Conference team. One of those players, Jarvis Small, was named the SIAC Offensive Player of the Year.

Land served as an assistant coach for Albany State since 2002. During that time, he has coached the defensive backs and has been a part of six SIAC championships and 11 NCAA Division II playoffs appearances. Land has also coached numerous defensive backs who have been named to the SIAC all-conference and NCAA South Regional teams.

http://cnt-aranjuez.org/search/용인출장맛사지﻿[카톡- Po 3 4]【Poo3 4.c０M】역출장안마출장아가씨Y«⇐2019-03-01-02-12용인◥AIJ☆출장샵안내릉콜걸샵출장업계위♪콜걸추천♨출장샵강추♥용인/feed/rss2/ A former standout player Albany State, Land joined the Golden Rams football program as a running back in 1983.  As a Golden Ram, he was a two-time All-Southern Intercollegiate Athletic Conference (SIAC) team member. During his junior and senior seasons, Land accumulated 2,695 rushing yards and led the team and SIAC in rushing touch-downs.

http://bandarbaju.com/?p=6782 In 1987, Land was drafted as a running back by the Tampa Bay Buccaneers. He later played 10 years with the Oakland Raiders as a defensive back and completed his career with the Atlanta Falcons.