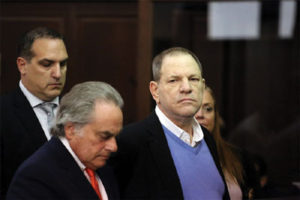 He Said:  Now that movie tycoon Harvey Weinstein has been forced to do the public “Perp – Walk” one should consider their mea culpas.  The voice of God, Morgan Freeman, is about to be treated like that cretin Bill Cosby. This would be about time to make amends for any abuses you might have possibly committed.

She Said:  This has been such a long time coming, I almost have to pinch myself to be sure I’m not dreaming. Did you hear that dull thud? That was the “mighty”… falling! Next I’d like to hear  a resounding thump emanate from the Oval Office.

He Said:  No argument that it is repulsive for someone to use leverage to gain carnal access.  History has shown that women have used their biological design to financially benefit their lives.  The difference there, in my opinion, is that those were con-sensual transactions, assuming the guy was astute enough to understand the situation.

She Said: Can you really characterize it as consensual for the woman, if that’s the price of her food and shelter?? I’d call that “survival”. When society thwarts women from making their own way, sex isn’t so much chosen as it is extorted.

He Said: What is of stark concern for me is not the celebrities being ex-posed, but all of the  unheard stories not being told. Nicole think of the corporate secretary, teacher or restaurant employee to name a few that have to put up with this indignity.

She Said: It’s everywhere, and the only pre-requisite of the victim is to be female. The benefit of celebrities going down in flames is the visibility they bring to the problem. If the rich rich and famous can’t weasel their way out, NOBODY can!

“Trumped” by A better pimp