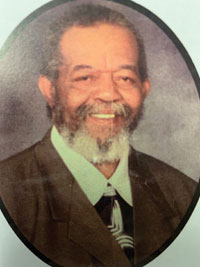 Melzee Jerome Odomes, Sr., affectionately known as “Big Rick” went home to be with the Lord on Friday, December 21, 2018. He was surrounded by his wife and youngest son.

Melzee was born to the union of KC. and Cora Lee Odomes in Fort Lauderdale, Florida. He was educated in the Broward County School District. He was a graduate of Dillard High School. He furthered his education at Shaw University in Raleigh, North Carolina where he met Rosa Marie Jackson, his soulmate. They were married and two sons were born to this union, Melzee Jerome, Jr and William Anthony. They resided in Raleigh, North Carolina for over forty years.

Melzee was a brother, a friend and a father to countless people. His loving and kind spirit shared wisdom and guidance to so many, he will never be forgotten. Melzee loved football and played at Shaw University. He was an avid Pittsburg Steeler fan.

In Search of James Evans,Sr.

What happened to the James Evans Sr.’s […]

Decades before today’s brand leaders in fashion, music, and sports leveraged their personas into market share, Graves perfected the blueprint. In the ’80s, […]